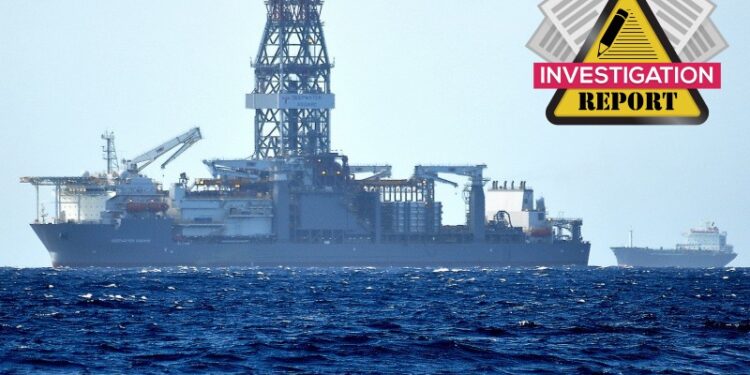 The US Bureau of Safety and Environmental Enforcement released the results of its investigation of the October 28, 2020 incident when the Transocean Drillship Deepwater Asgard sustained major damage to various operational components while evacuating from an area impacted by Hurricane Zeta.

On Saturday, October 24, 2020, Tropical Disturbance #59 slowly approached the Gulf of Mexico from the Caribbean while the Deepwater Asgard drill crew was in the process of tripping drill pipe in the well to set a cement retainer.

The cement retainer was set at 26,200 feet to isolate high pressure zones in the wellbore. Once the retainer was cemented in place, the drill crew began to pull out of the hole (POOH) with the drill string.

While POOH, the drill crew experienced mechanical problems with the Iron Roughneck (IR), which breaks the connections on the drill string. The IR remained out of service for most of Sunday, October 25th, 2020 until repairs could be made.

In the meantime, Tropical Disturbance #59 developed into a weak Tropical Storm named Zeta and continued to move slowly toward the Gulf of Mexico.

Repairs were completed on the IR early Monday morning on October 26th, allowing the drill crew to finish POOH with the drill string. Once the procedure was completed, the drill crew was instructed to make up a drill bit on the bottom hole assembly (BHA) below the Retrievable Test Treat Squeeze packer (RTTS) and trip in the hole (TIH).

The RTTS was set at 6,585 feet and a successful positive and negative test were accomplished. On October 27th, Tropical Storm Zeta strengthened to a category 1 Hurricane and entered the Gulf of Mexico with the Asgard in its projected path.

The drill crew displaced the riser with seawater and pulled the RTTS running tool out of the hole to prepare to either disconnect from the wellhead or stay connected as the hurricane approached.

A conference call between BOE and Transocean was held, and Transocean elected to stay connected to the well because previous sister drillships in similar conditions (Category 1 Hurricane Conditions) rode out storms without issues. On October 28, 2020, Hurricane Zeta’s eyewall hit the Asgard, forcing it into the red watch circle.

At approximately 09:40 hours, with winds constant at 90 to 100 miles per hour (mph) and sea swells at 30 feet, the EDS was activated successfully and the LMRP cleared the Blow Out Preventers (BOPs) without issue. The derrick wind sensor recorded a peak wind gust of 152 miles per hour (mph) at 10:36 hours as the drillship moved in a Northwest direction after the EDS.

The marine riser was damaged when it hit the wave breaker in the moon pool and shortly thereafter the Asgard passed over a ridge of shallower water and the LMRP struck the seafloor, dragging it thru the mud. After traveling approximately 2.5 nautical miles, the Asgard began to maneuver back to the safe zone. The LMRP struck the seafloor for a second time before reaching its destination. Upon arrival, Transocean and BOE began accessing the damages to the drillship and its equipment.

Inaccurate weather forecast, the actual weather was worse than what was forecasted at the drillship’s location. The original forecast said the storm would pass to the east of the Asgard’s location and the storm would be a category 1 hurricane. Category 1 hurricane force winds range from 74 to 95 mph. The Asgard experienced strong category 1 to category 2 hurricane force winds and extremely rough sea states, with a peak wind gust equal to a category 4 hurricane.

Human error, the decision was made to stay latched up to the well and ride out the storm.