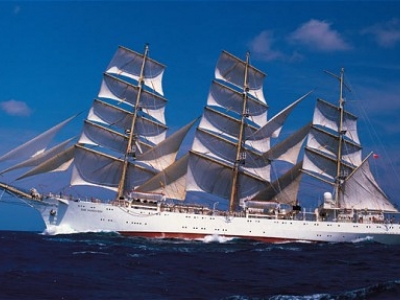 The days of sail may be just about to recommence. The UK's Committee on Climate Change has come out with a report that recommends 'installing supplementary power systems to make use of solar or wind power' on British ships.

In a report that drew attention to the carbon emissions from ships, it signaled a potential return to the halcyon days of the 19th Century when clippers crossed all the oceans of the earth carrying both goods and passengers.

Many of the ships has three masts, some five. However, the introduction of steamships and their greater reliability of schedule, spelled the end of those grander days.

Now the Committee wants the industry to go back to the future by 'updating propulsion systems', which would see ships fitted with sails, including a new rigid design resembling aircraft wings or large 'towing kites'.

Here are the full list of the recommendations for reducing ships' emissions, which could see major changes in the way the world of shipping performs:

...and they made some other recommendations as well:

The Committee's interest has been underpinned by a five-year study carried out by the Technical University of Berlin.

It found that ships using sails as well as other conventional wind power achieved savings as high as 44 per cent.

Shipping could also cut its emissions by using special paint on hulls to reduce friction and saving fuel by travelling slower. 'There is a wide range of technology which can be used to cut emissions,' said David Baltson, the British Chamber of Shipping's director of safety and environment. 'Slow steaming is one option.

'Already, because of the price of fuel, ships are cutting their speed. A container vessel which was going at 25 knots, has slowed down to 19 knots, achieving fuel cuts of 30 to 40 per cent, this has added four to five days on a voyage from the Far East.

The committee, which advises the Government on climate change, also wants Britain to be the first country to include shipping emissions in its calculation of greenhouse gases.