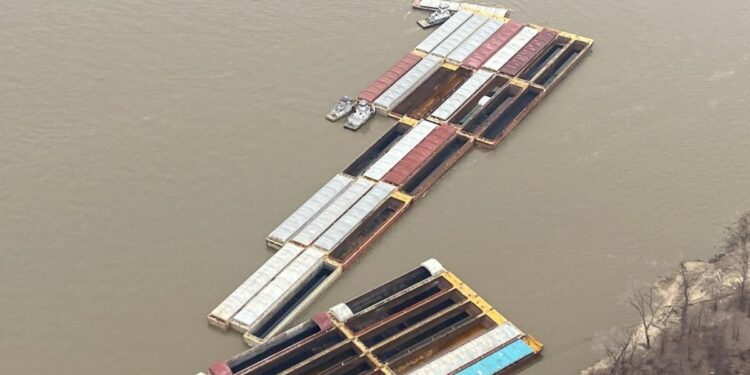 On Wednesday 13 February, the US Coast Guard along with several local authorities responded to a multi-barge breakaway close to the Upper Mississippi River. Specifically, the breakaway occurred near mile markers 176 and 177 of the river.

In fact, it was at 3 a.m when watchstanders at Sector Upper Mississippi River received a report that there was a breakaway from a barge fleeting area.

In light of the situation, the Coast Guard along with multiple towing vessels worked together in order to secure all those barges.

During their operation, authorities close the river for the safety of those on the waterway.

Coast Guard eventually reopened the river, when all the loose barges had been accounted for.

Thankfully, there were no any injuries or pollution reported. Although the main causes of the incident still remain unknown and the matter is under investigation.

The Coast Guard works closely with our port partners and local law enforcement to properly manage incidents like this. Anyone on the water should maintain vigilance while operating on the waterway.

For the records, except from the Coast Guard Sector Upper Mississippi River, the involved participants were the Illinois State Police,  the Missouri Department of Transportation, the River Industry Action Committee and lastly the Signal Hill Fire Department.