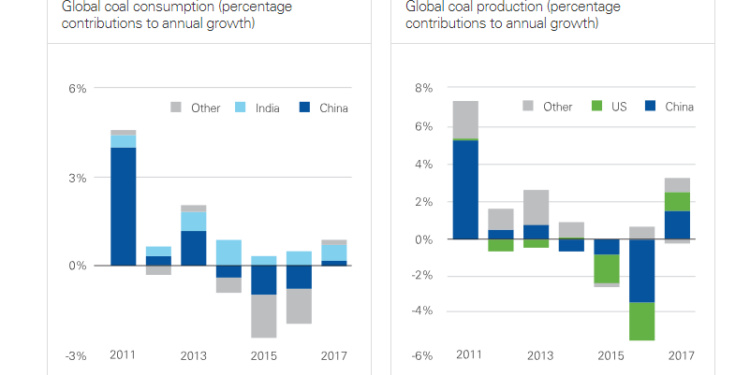 After several years of free-fall, the coal market experienced a mini-revival last year, with both global consumption and production increasing, by 1% and 3.2% respectively, according to BP’s Statistical Review of World Energy.

–Global coal consumption rose by 1%, (25 mtoe), with India (4.8%, 18 Mtoe) recording the fastest growth, as demand both inside and outside of the power sector increased. Interestingly, after three years of successive declines, China’s coal consumption (0.5%, 4 Mtoe) also ticked-up. This is despite the substantial coal-to-gas switching in the industrial and residential sector, as increases in power demand in China sucked in additional coal as the balancing fuel.

–Global coal production increased more strongly (3.2%, 105 mtoe), driven by notable increases in both Chinese (3.6%, 56 Mtoe) and US (6.9%, 23 Mtoe) output. Interestingly, the increase in US production came despite a further fall in domestic consumption, with US coal producers instead increasing exports to Asia.

Somewhat counter-intuitively, the increase in Chinese coal production was a result of the on-going measures to reduce excess capacity within the Chinese coal sector. A central part of this reform process has been managing the need for a Goldilocks-type price for coal. Too hot and it would reduce the pressure for inefficient mines to close or merge, as well as raising general energy costs. Too cold and it would threaten the underlying viability of a sector that still provides around 60% of China’s energy.

The fact that Chinese spot coal prices were above the government’s target price band through much of last year spurred a series of policy measures to increase coal supplies and so ease price pressures. The increase in Chinese coal production of over 3.5% last year, its strongest growth for six years, was a direct result of these actions.