Diaplous Maritime Services has produced a White Paper on the issue of the HRA border reduction in the Indian Ocean, which includes a detailed threat analysis on Somali Based Piracy after taking into consideration a number of variables. The official position of Diaplous is that shipping companies should not become complacent in matters of maritime security, in order to prevent a resurgence of piracy and that BMP 5 standards should be followed at all times for Somali Basin & GoA transits.

In the past days and following the attacks off Fujairah on the 12th of May, we are seeing continuous changes in the application of additional premiums by the leading War Clubs

In light of the new developments, the white paper, which was issued prior to these changes, provides very useful insights.

Specifically, as of May 1st, 2019, the Indian Ocean Region High Risk Area has been revised following an earlier announcement issued by the below organizations:

The new HRA is within the following coordinates:

In the Indian Ocean a line linking: From the territorial waters off coast of east Africa at Latitude 05° 00’S to 050° 00’E. Then to positions:

Then a bearing 310° to the territorial waters off the Arabian Peninsula. 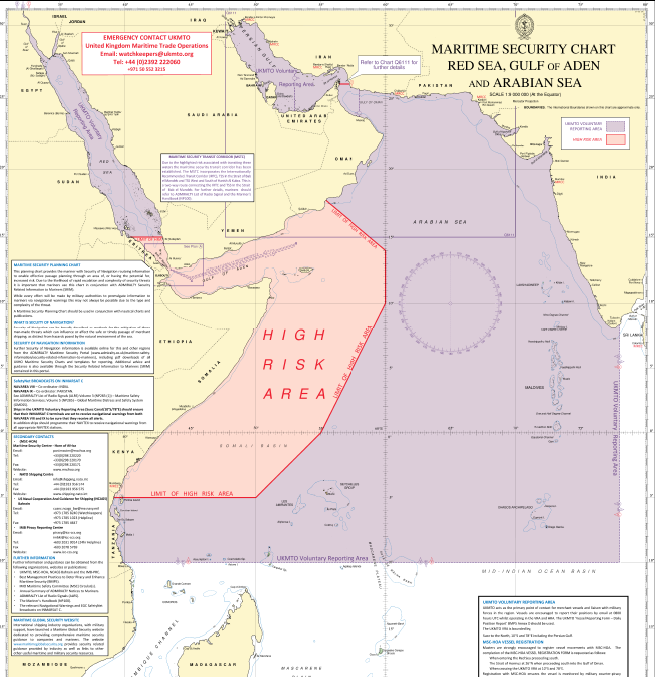 According to open source information the following Navy Assets are in the wider region, available to provide assistance to vessels in distress or facing a security incident:

It is worth noting that various National Navies (India, China, S. Korea, Japan etc.) operate in the GoA performing convoy escorts within the IRTC.

Cooperation between the above-mentioned forces is good but coordination is still to be maximized.

The time required for any of these assets to be in the immediate vicinity of a merchant vessel under attack rages from 2 to 20 hours.

Somali Pirate Action Groups (PAG’s) have recently been active off the South – Eastern and Central coastlines having recently performed attacks and hijackings.

On the 19th of April 2019 a Yemeni Dhow was hijacked and used as a mother ship to carry out attacks on merchant and commercial vessels.

The F/V Adria, which is of S. Korean registry of ownership, did not have an Armed Security Team (AST) onboard but managed to evade the attack long enough to receive assistance from the Spanish F/V Txori Argi that arrived on scene to assist.

The F/V Txori Argi had an AST onboard who engaged with the attacking skiffs that were launched from the pirate’s mother vessel leading to the withdrawal of the later.

Later on the same day, the Chinese Fishing Vessel Shin Shuen Far 889 was also engaged by 2 skiffs with armed persons on board. This attack was also unsuccessful as the Chinese F/V also had an AST on board.

The Spanish Frigate ESPS Navara, operating under EUNAVFOR mission Atalanta departed from Mombasa port and arrived on scene to provide further assistance. On the 23rd of April, the ESPS Navara, intercepted and boarded the PAG’s mother vessel and arrested 5 pirates.

The hijacked Dhow, the F/V Al Azham and her 23-man crew were released unharmed.

This incident clearly demonstrates that Somali Based Piracy has NOT been eradicated and still poses a significant threat to shipping and the safety of human life at sea in the Indian Ocean.

Intelligence and information gathered from open and closed sources, clearly indicates that coastal communities in Somalia’s Central and South-Central regions, are still keen to support PAG operations in the Indian Ocean.

The reduced HRA will by all means and purposes send out the wrong message to the international maritime community that the threat has also been reduced while this couldn’t be further from the actual truth.

This news has also reached the PAG leaders who will patiently wait for complacency to set in with mariners and companies, eventually making them soft targets again.

Somali based piracy has been dormant for a significant time, however the same armed groups that performed successful hijackings from 2009 and on, are still operating in the region in a different mode.

Smuggling of narcotics, weapons and people from Somalia to Yemen and beyond, has been the business of choice for the past years.

Through these operations, subject groups have upkept their sea going equipment, weapons and a healthy cash flow to sustain them until the next big opportunity presents itself.

Military sources in the region are expressing their serious concern on the wisdom behind the decision to reduce the HRA at this time, clearly stating that the conditions in country (Somalia) have not changed in order for piracy to be affected in a negative way.

“Piracy is fought on land; it is only intercepted on the water”

Additionally, we see the difference on opinion between the leading War underwriters, with one major club adopting the revised HRA and the other not.

The London market has not seen positively this revision and the JWC has not made an announcement endorsing it.

The position taken by all the major key players of the maritime security industry, is that of caution, in principle all security experts disagree with the time and manor this reduction has come in to force.

The attacks of May 12th 2019 at Fujairah Anchorage although not related with any piracy activity, indicate a new substantial risk in the wider region.

In past years the waters around Fujairah were within the HRA area and the security level was higher than that prior to May 12th.

Analysis and reports from leading global organizations mention that these attacks were done by the use of remotely controlled mini submersibles, each delivering a payload of approximately 30-50 Kg of high-grade explosives.

These underwater drones struck their targets and detonated at a depth of approximately 2.5 meters and in all cases the target area of the vessel was around the engine compartment at the stern of the vessels.

Most hypothesis on the identity of the aggressors are pointing towards regional actors, mainly Iran, rationalizing this as an expression of the rising tensions between the US and Iran.

Although it is regarded as highly unlikely for the industry to see a repetition of these attacks, the alarm has been raised in an area deemed secure in the past. 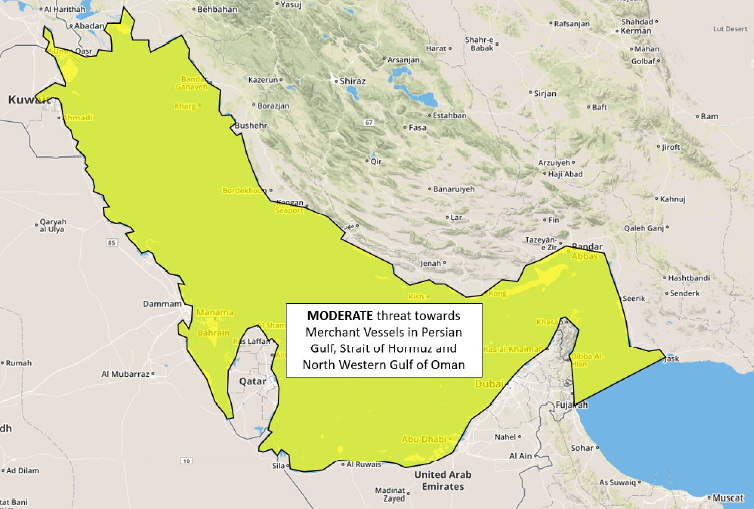 The revision of the IOR HRA as of May 1st 2019 has indeed sent the wrong message to the maritime community.

Somali based piracy is lurking, watching and preparing for a new life cycle that will catch a large portion of the industry by surprise and the first to be affected, will be those that fall back on their preparedness, those that will dismiss the lessons learnt from the not so distant past.

Armed Security Teams on board merchant vessels have proven to be 100% reliable in protecting sea farers and vessels from acts of piracy in the high seas.

This is commonly agreed upon by the entire world.

Military assets are an essential element in the battle against piracy and assist in maintaining the international shipping routes open for free navigation, however they are not on board or alongside every vessel sailing the Indian Ocean.

When a merchant ship is attacked, she is usually alone and vulnerable, help may be hundreds of miles away and no response is guaranteed.

Armed Security Teams through Private Maritime Security Companies not only physically protect the lives of the mariners and the ships they sail, but also protect the reputation and profits of the companies behind them.

It is therefore essential that the industry does not become complacent and that all protective measures remain in force for all Somali Basin and Gulf of Aden transits.

CSO’s, HSQE professionals and others within the customer base of the maritime security industry, are advised to take all available information under consideration when reviewing their security procedures and deployment of protective measures for the vessels and mariners under their care.

The use of Armed Security Teams is considered to be a must for all Somali Basin and Gulf of Aden transits.

BMP 5 guidance should be used in every HRA transit and the deployment of a professional and compliant Armed Security Team, provided by a reputable Private Maritime Security Company should be considered for all GoA and Somali Basin voyages.

The shipping industry has welcomed the announcement of the BMP 5, which is available for use to all those intend to transit from Horn of Africa (HOA) and adjacent sea areas. Somali piracy has not been eradicated and remains a threat, however.

BMP 4 was a publication titled “Protection against Somalia Based Piracy”. Now, BMP 5 is focusing to “Deter Piracy and Enhance Maritime Security in the Red Sea, Gulf of Aden, Indian Ocean and Arabian Sea”. The area specific (Somalia based) threat, has been replaced by a generic area term in order to include all additional piracy threats generated by other players in this area (Yemen, Aden straights, open ocean threat to Indian ocean and Arabic sea).

It important to focus on the fact that as in BMP 4 the HRA was clearly established (latitude – longitude), in BMP 5 reference is made to Security chart Q6099. This means that any area change will be introduced through the chart change and not by a BMP amendment.