BIMCO submitted a proposal to the IMO that aims to help curb emissions by regulating ships’ power, rather than focusing on raw speed limits, and presents a way to cut emissions based on the average performance of each ship type trading at target operational speeds for the past three years.

Recently, BIMCO's Deputy Secretary General, Lars Robert Pedersen commented on the hard part of measuring a vessel's speed, presenting four options of measuring the vessels' speed, out of which one is the the one that could work in practice, highlighting the difficulty of this procedure.

Specifically, BIMCO's document proposes another approach on achieving the perceived emissions reductions of speed limits by regulating the propulsion power of existing ships, as a proxy for emissions.

Ship’s speed is the single most important variable influencing their CO2 emissions.

In addition, as mentioned above, ship's speed is not easily assessed from an enforcement perspective, given that sea currents, sea state and weather conditions affect the relation between speed over ground and speed through water. Therefore, the impacts along with the cargo loading condition that differ between voyages result to a emissions' differentiation for the same speed of a ship.

The speed of the vessel is a result of the power used to propel it through the water. Additionally, the correlation between the vessel's speed and the power needed to achieve the speed reflects the efficiency of the ship's hull and propeller.

Moreover, BIMCO proposes that the power limit could be derived from the performance in real weather and sea conditions of an average ship built in the decade prior to entry into force of the Energy Efficiency Design Index (EEDI) regulation in 2013 sailing at a target speed.

The limit for a ship's power has been already proposed by Japan in paper ISWG-GHG 5/4/1 as one feature of EEXI for existing ships. However, establishing what the limit could hasn't been finalised yet, giving the opportunity to BIMCO propose a mechanism for bridging focus on speed with focus on power using an average operational speed for each ship type as the basis.

Recently, in an exclusive interview, Dr Harilaos Priftis commented that 'if speed reduction is implemented via speed limits, it will create many distortions in the market and more importantly it will hardly incentivize the development of the energy-efficient technologies and low carbon fuels that are necessary so as to meet the IMO GHG emissions reduction targets', adding that undoubtedly speed reduction can lead to GHG emissions reductions.

The proposed concept would have the benefit of capturing the emissions reductions already achieved since 2008 by slower steaming whilst maintaining the present competitive playing field between ships. It would similarly maintain the benefit of operating ever more efficient ships should owners opt for modifications to improve efficiency of their ships. 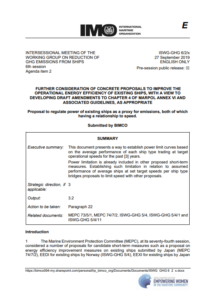