To better understand how shipowners view the biofouling and in-water processes, BIMCO launched a survey in 2018, highlighting that manual collection of data is the most popular method among the companies that responded; The results of the survey were presented to the IMO.

Given that biofouling is gaining much attention from states, shipowners, and port authorities around the world, BIMCO is looking for additional ways on biofouling management and ways to enhance access to in-water cleaning.

Understanding Biofouling: It is the intrusion of invasive aquatic species to new environments by ships is now identified as a major threat to the world’s oceans. These species, traveling on ships’ ballast water or on their hulls, are able to survive, establishing a reproductive population in the host environment.

BIMCO's survey aimed to ensure that the result of the cleaning is conducted according to a set of specifications; the environmental impact of the process and coating damage is controlled; and the cleaning process is planned, safe and effective.

The survey was launched in May 2018 and lasted for six weeks; BIMCO received the replies of 38 companies owning or operating a total of 2,205 ships.

The respondents informed that those with large fleet used different anti-fouling systems on different ships according to the ship's trading profile; biocidal coating, hard coating.

How respondents monitored the performance of AFS

According to the graph above, respondents noted that manual collection of data is the most popular method among the companies that responded.

It should also be mentioned that the percentages in figure 1 are accumulated and that several of the companies use more than one method.

The graph below presents how the respondents implemented the biofouling management plan into their shipboard management systems used such as the safety management system (SMS) and/or the planned maintenance system (PMS).

The way in which the biofouling management plan is implemented

Moreover, the survey highlights that 33 respondents out of a possible 38 (87%) took the Biofouling Guidelines into consideration.

In the question "When respondents are carrying out in-water inspections", two-thirds of all ships called for inspections if a concerning level of biofouling had been determined, but a few of the options may benefit from further explanation. 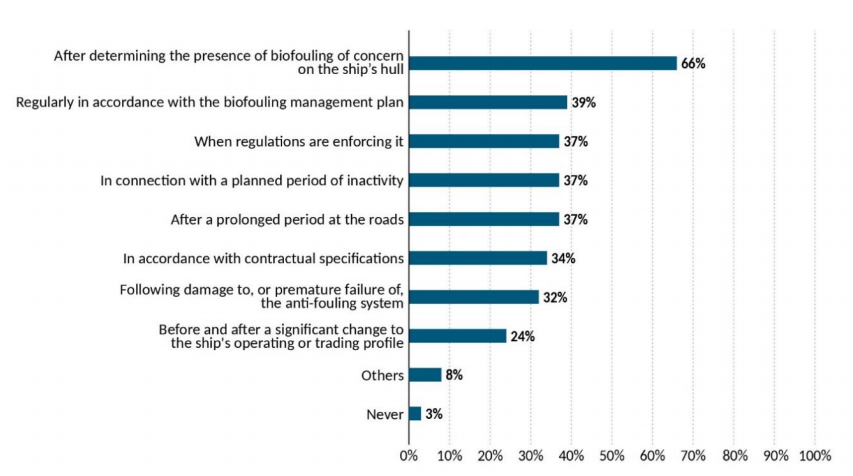 When respondents are carrying out in-water inspections

Overall, the maritime sector uses two different approaches to determine when to clean the hull.

#1 Responsive cleaning: reacting to observations made during inspections and/or when fuel consumption has increased due to more frictional resistance between the hull and water.

It is encouraging to note that most of the respondents are following the Biofouling Guidelines. Further, almost every respondent had biofouling management in place and many respondents have taken niche area cleaning into consideration. 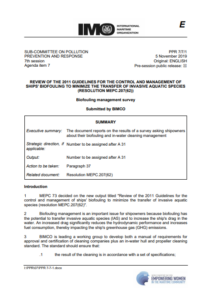