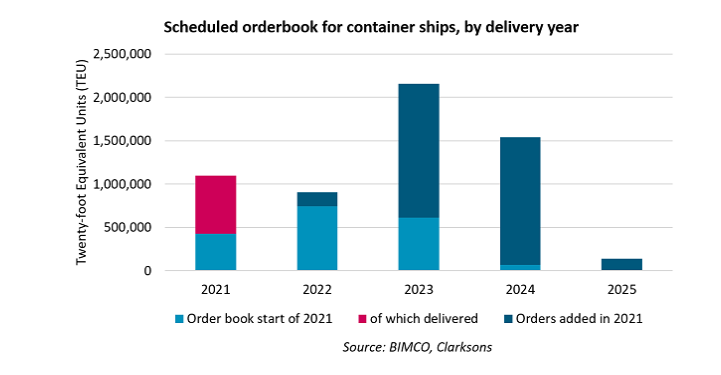 Freight rates are record high, more cargo than ever before is shipped on the transpacific trade lane specifically and globally in general, and the previous annual record on new orders for container ship capacity has just been breached – in less than eight months, according to BIMCO’s chief shipping economist Peter Sand.

As informed, 619 container ships are now on order for future delivery, 381 in 2021 alone, and never has 3.44m TEU being ordered in such a short time span.

“Today the container ship order book holds 5.3m TEU of shipping capacity. This set to be added into the fleet from 2023 and onwards.

Going into 2021, the order book only stood at 2.5m TEU. Since then, a record high 3.3m TEU has been ordered. Ship owners really like to invest in the business they now.

Size still matters, but it’s no longer the only thing. Your ships must be ready to fit emerging trade lanes – and many of them will be scrubber-fitted,” says Peter Sand, BIMCO’s Chief Shipping Analyst.

For the records, 60 container ships with a cargo carrying capacity of 16,000 TEU each were ordered in February, March, April, and June by just five different owners. The one half of them was ordered by two Top-4 tonnage providers and one minor, and the other half by operating liner companies.

As owners see a somewhat different trade pattern developing in recent years and very much right now, due to the US-China trade war and the COVID-19 outbreak, the more ‘versatile’ 13,000-16,000 TEU have been preferred to the Ultra-Large Container Ships (ULCS).