US Rep. Diana DeGette introduced legislation to reduce the large amounts of methane pollution and waste that are being released into the atmosphere each year by oil and gas producers across the country. About one-third of all methane released in the US comes from oil and gas operations.

To protect this fuel and prevent it from being wasted or released into the atmosphere, Ms. DeGette’s legislation would require all oil and gas producers in the US to take measures to capture any methane gas that reaches the surface at their well sites, and not burn it off or let it leak into the atmosphere.

The legislation would also ban the venting of any natural gas on public lands, as well as methane flaring at any new wells created two years after the bill is passed.

Essentially, the legislation would reinstate, strengthen and protect two 2016 rules that the Obama administration had established. The first limited the amount of methane that oil and gas producers could release. The second sets similar limits that apply to any new or modified oil and wells in the US.

If approved, the legislation would prevent the EPA from rolling back its version.

Between 2009 and 2015, oil and gas producers released around 462 billion cubic feet of methane into the atmosphere. If captured, this amount would have been enough to supply about 6.2 million households for a year.

A number of US states, including Colorado, North Dakota, Wyoming, Utah and Pennsylvania, have already taken measures to curb venting, flaring and leaks within their boundaries. 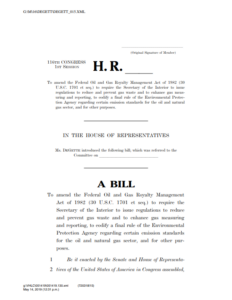