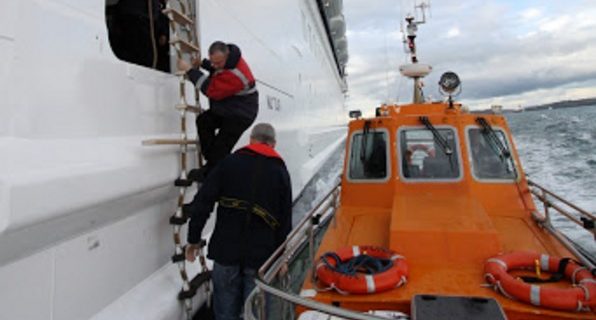 Riyadh Memorandum of Understanding (Riyadh MOU) will launch a concentrated inspection campaign (CIC) on Pilot Transfer Arrangements. The three month campaign will start on September 1, 2016 and end on November 30, 2016. The Riyadh Memorandum of Understanding on Port State Control in the Gulf Region, known as the Riyadh MoU, was signed at meeting in Riyadh by 6 countries: Bahrain, Kuwait, Oman, Qatar, Saudi Arabia and UAE.

The purpose of this CIC is to verify that vessels comply with the requirements and measures regarding pilot transfer arrangements on board ships detailed in the Annex to IMO Resolution A.1045 (27) and that they are meeting applicable requirements of the SOLAS and related guidelines. During the campaign period, member Authorities of participating MOUs will inspect within the resources available, as many ships as possible in conjunction with routine port State control inspections.

Port State Control Officers (PSCOs) will apply a questionnaire (listing twelve items) to be covered during the concentrated inspection, for example, the condition of the ladder and ropes and the familiarity of the ship’s master and crew with pilot transfer arrangements. Where deficiencies are found, actions by the PSCO may range from recording a deficiency to be rectified within a certain time period to detention of the ship until the deficiencies have been rectified.

Ship managers should be prepared for the questionnaire and address all items as appropriate. They are also recommended to advise masters and crews of the CIC and to check that pilot transfer arrangements meet the requirements of Resolution A.1045 (27), and that relevant documentation is available and up to date. Reference should also be made to IMO circular MSC.1/Circ.1428 on required pilot boarding arrangements.

1. Is the pilot ladder certified by the manufacturer as complying with the requirements of SOLAS Chapter V, Regulation 23 and IMO Resolution A.1045 (27)?

The requirements in SOLAS V/23, deal with the standards for equipment installed and arrangements for pilot transfers on ships on or after 1 July 2012.The standards adopted by the IMO can be found in IMO Resolution A.1045 (27) “Pilot transfer arrangements”. SOLAS V/23.2.3 additionally states that a pilot ladder shall be certified by the manufacturer as complying with V/23 or “with an international standard acceptable to the Organization” and refers to ISO 799:2004 “Ships and marine technology – pilot ladders”. Compliance with this particular provision of SOLAS V/23 can be met when a manufacturer has certified the pilot ladder complies with either of the above standards, which are not identical.

2. Is there a record kept on board with the date the pilot ladder is placed into service and any repairs carried out?

A record shall be kept on the ship as to the date the identified pilot ladder is placed into service and any repairs effected. Deck Officer on board shall focus on the proper record keeping.

3. Is there a regular inspection carried out and recorded to ensure that the pilot ladder is safe to use?

All arrangements used for pilot transfer including pilot ladder shall efficiently fulfil their purpose of enabling pilots to embark and disembark safely. The pilot ladders shall be kept clean, properly maintained and stowed and shall be regularly inspected to ensure that they are safe to use. They shall be used solely for the embarkation and disembarkation of personnel. All the inspections carried out shall be properly recorded and these records shall be available at any time requested by a PSC Inspector.

4. Is there a permanent marking provided at regular intervals throughout the length of the ladder in order to facilitate the rigging of the ladder to the required height?

5. Are there means provided to Access to the ship’s deck to ensure safe, convenient and unobstructed passage for any person embarking on?

Means should be provided to ensure safe, convenient and unobstructed passage for any person embarking on, or disembarking from, the ship between the head of the pilot ladder, or of any accommodation ladder, and the ship’s deck; such access should be gained directly by a platform securely guarded by handrails. Where such passage is by means of:

6. Is there a mechanical pilot hoists used?

7. Is there a lifebuoy equipped with a self-igniting light in pilot landing platform?

When persons are being transferred, a lifebuoy equipped with a self-igniting light shall be kept at hand ready for immediate use. Deck Officer shall confirm that such equipment is provided as requested by regulations.

8. Are there suitable bulwark ladders and stanchions provided?

9. Are the steps of the ladders made of hardwood, in one piece and non-slippery?

The steps of the pilot ladders should comply with the following requirements:

10. Are pilot ladder steps parallel and the last four steps made of rubber of sufficient strength?

The steps of the pilot ladders should comply with the following requirements:

11. Are the shipside doors used for pilot transfer opening inwards?

In accordance with SOLAS Regulation V/23, paragraph 5, shipside doors used for pilot transfer shall not open outwards but must open inwards.