Specifically, the report focuses on the progress that has been made across the issues stated above, as well as the challenges that remain to sustainable maritime security in the region. It also suggests several areas of policy prioritization that could have positive impacts across issue areas and help establish a self-reinforcing, positive cycle of maritime security in the Bay of Bengal. 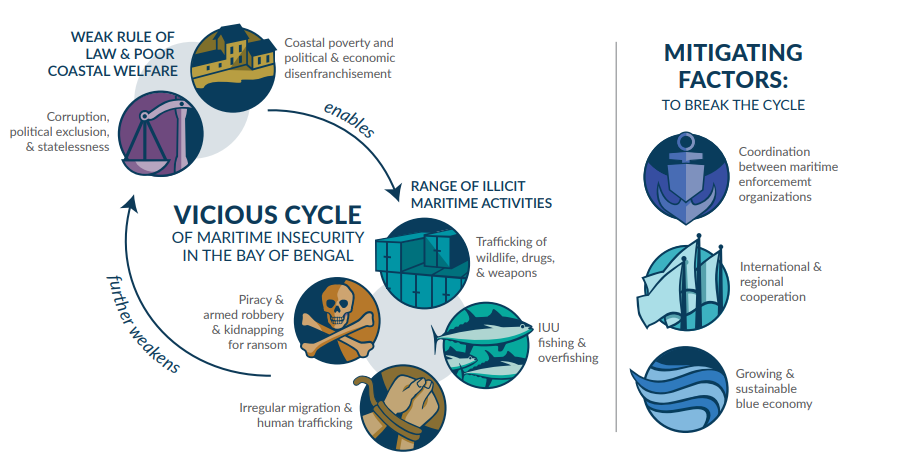 Several ports at the area face difficulties, including inefficiency, corruption, and lack of capacity. These challenges have a negative impact on the maritime industry and the blue economy. From an economic point of view, corruption and a lack of capacity in some ports degrades the efficiency of shipping and international trade.

The report highlights that to improve the current condition at the ports will need large-scale investments in the infrastructure and modern cargo-management systems. For the time being, progress is obvious at in India’s Sagar Mala initiative, which would benefit from additional responsible outside investment. Automated cargo-management and customs systems can also help improve efficiency and limit opportunities for corruption, though such systems are costly and may encounter resistance from the entrenched interests of port officials and workers.

Although the Bay of Bengal has a moderate degree of capacity in this area, gaps remain. Specifically:

To deal with the challenges expressed above, the report notes that the issue of statelessness is the key.

The stateless status of some coastal communities undermines their economic and physical security and drives dangerous maritime mixed migration, enriching criminal networks in the process. There is no easy solution to this challenge, but the development of legal migration pathways and increased assistance from the international community in finding a long-term resolution to the current Rohingya crisis will mitigate not only the suffering of stateless communities, but also the downstream impacts of statelessness on regional maritime security.

Explore more about the Bay of Bengal herebelow