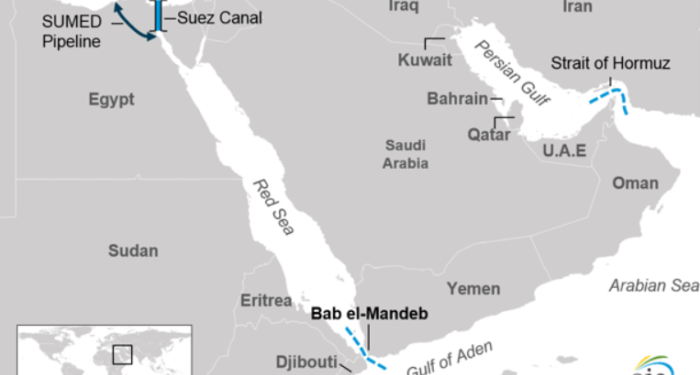 As EIA informs the Bab el-Mandeb Strait is a strategic route for oil and natural gas shipments. The strait is a sea route chokepoint between the Horn of Africa and the Middle East, linking the Red Sea to the Gulf of Aden and Arabian Sea.

The majority of exports of petroleum and natural gas from the Persian Gulf that transit the Suez Canal or the SUMED Pipeline pass through both the Bab el-Mandeb and the Strait of Hormuz.

Chokepoints are narrow channels along widely used global sea routes that are critical to global energy security. The Bab el-Mandeb Strait is 18 miles wide at its narrowest point, limiting tanker traffic to two 2-mile-wide channels for inbound and outbound shipments

In case the Bab el-Mandeb Strait closes, it could keep tankers originating in the Persian Gulf from sailing through the Suez Canal or reaching the SUMED Pipeline. This would make them divert around the southern tip of Africa, increasing transit time and shipping costs.

During 2018, around 6.2 million barrels per day (b/d) of crude oil, condensate, and refined petroleum products flowed through the Bab el-Mandeb Strait toward Europe, the US, and Asia, marking an increase from 5.1 million b/d in 2014.

Total petroleum flows through the Bab el-Mandeb Strait amounted to 9% of the overall seaborne-traded petroleum in 2017. About 3.6 million b/d moved north toward Europe, while another 2.6 million b/d flowed in the opposite direction, mainly to Asian markets such as Singapore, China, and India.

More recently, as new natural gas fields in Egypt started operations, the need for Egypt to import LNG has fallen. Like flows to Egypt, total northbound flows of LNG via the Bab el-Mandeb have also reduced since 2016 as northbound flows to other destinations have remained fairly constant.