Quintin V. Kneen (Quintin) is the President & Chief Executive Officer of Tidewater Inc. (Tidewater), the world’s largest owner and operator of Offshore Support Vessel (OSV) fleet which comprises more than 200 vessels. Established in 1956, the Houston-based company is anchored by its long heritage with over 65 years of experience supporting offshore energy exploration and production activities worldwide. For details, visit www.tdw.com

Since his appointment as the leader of Tidewater on 3 September 2019, Quintin has been a strong advocate of upholding high standards of safety and operational excellence. He has been actively driving the company to embrace innovation and technology to achieve work-cost efficiencies and to maximize returns for investors. He strives to make Tidewater the world’s best and most efficient global vessel operator in the industry.

Previously, he was the Vice President, Finance & Investor Relations of Grant Prideco, Inc. and served in several executive finance positions in the company since June 2003. Prior to joining Grant Prideco, Quintin assumed several executive finance positions at Azurix Corp. and was an Audit Manager with Price Waterhouse LLP, in Houston. Quintin holds a Master of Business Administration from Rice University, Houston and a Bachelor of Business Administration in Accounting from Texas A&M University. He is a Certified Public Accountant and a Chartered Financial Analyst. 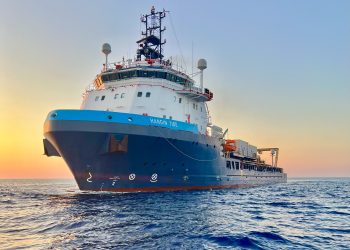 Tidewater: Young people should acknowledge shipping as an exciting industry for their career

Mr. Quintin V. Kneen, President and Chief Executive Director, Tidewater Inc. shares top priorities in their agenda and actions to change industry’s image from one that is dated, to one that is dynamic and exciting so that more people would be interested to pursue lifelong careers.