Australian cutter grounding linked to poor use of ECDIS

The cutter was on a passage from Saibai Island in the Torres Strait Islands archipelago bound for Lizard Island, located about 71 NM south-east of Cape Melville.

The cutter sustained substantial damage to the keel, stabiliser fins and propellers, with hull breaches in way of the storage void and tank compartment spaces.

There were no reported injuries or oil pollution. The cutter was subsequently towed off the reef, stabilised and towed to Cairns, arriving on 5 October 2017.

The ATSB investigation found that:

As a result of the investigation, the ATSB considers the use of point features in electronic navigational charts to represent areas of relatively significant size on the earth’s surface is likely to increase the risk of the hazard posed by such features being misinterpreted and potentially reduce the effectiveness of ECDIS safety checking functions,

The ABF have advised the ATSB of several measures aimed at improving fleet knowledge of ECDIS functions and features:

The ABF is also engaged in ongoing work with the ECDIS manufacturer to improve ECDIS type‑specific familiarisation training.

The ABF also advised that a review of navigation related procedures and work instructions was undertaken and completed. This resulted in several work instructions being updated and re-issued with the lessons learned from the investigation incorporated into the instructions.

The ABF undertook a program of software and hardware upgrades to update all cutters to the IHO’s S-52 Presentation Library 4.0. This was completed in September 2018.

AMSA have reminded all Recognised Organisations of the requirement that an ECDIS is only compliant when installed and operated in accordance with the type-approval issued.

In addition, the AHO has published an online supplement to the Seafarers Handbook for Australian Waters that will be fully incorporated as a new chapter into the new edition of the handbook (Edition 5), due for publication in 2019. The supplement addresses the dangerous effects of overscaled ECDIS displays near features such as isolated danger symbols.

ECDIS type-specific training needs to be designed, delivered and undertaken so operators have the required knowledge to confidently operate ECDIS as intended by the manufacturer,

Like all on-board equipment, ECDIS needs to be maintained and compatible with the latest applicable standards, 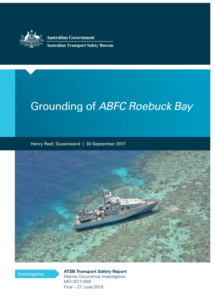