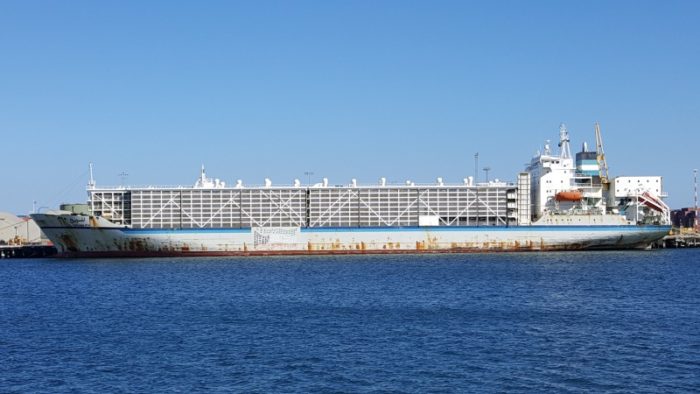 The Australian Department of Agriculture published a summary of its report for the May 2018 live export voyage of the Al Shuwaikh. The report reveals suffering due to the ship's design and management of livestock on board.

Namely, the ventilation configuration on board the vessel has two systems, one for open decks and one for closed decks. On about eight days of the voyage, the IO observed sheep open mouth breathing and attempting to gain position around the ventilation vents on all open and closed decks.

This was especially notable on hot days with higher humidity. In these cases, death by smothering was an observed result and six to eleven of the observed mortalities around the ventilation vents could have been attributed to smothering.

This situation appeared to be more apparent in pens with higher density.

Temperature and humidity readings were recorded every four hours during the day on each deck. Wet and dry bulb thermometers were well positioned along the aisles of each deck. The positioning gave an effective representation of the environmental conditions. However, the IO found that the closed holds had consistently higher temperatures and humidity than the open holds.

This may have been partly because of the oil fuel heaters being left on during the equator crossing. These oil fuel tanks were located against the walls of the closed holds. The oil fuel is heated in order to flow efficiently through the engines.

When this concern was raised to the AAV, CO and Master, the heaters were immediately shut down and temperatures were significantly reduced within 48 hours.

Nonetheless, deck nine was observed to contain livestock with consistently elevated respiratory rates. This was likely due to the dark coloured steel roof surface absorbing radiated heat from above.

The IO also noted high standard of care for the livestock and explains that any issues were addressed in a timely manner.

During discharge in Kuwait, the IO noted that the livestock were not supplied with fresh fodder for two feedings in a row, which is a period of about 30-32 hours. The IO noted this was the only time the sheep were heard to vocalise loudly.

What is more, the IO also noted a number of water troughs were fouled from manure accumulation in the upper tier overflowing and falling into the water troughs below. The crew attended to this issue, however the troughs were continually getting fouled towards the end of the voyage.

This was because of skeleton crew being allocated to routine husbandry practices. This is because during discharge, the crew are extremely busy with discharge responsibilities and staff are given time to sleep prior to all-night shifts.

You may see more information in the PDF herebelow 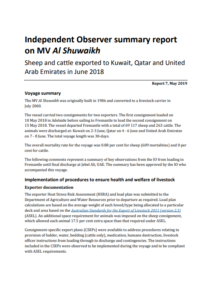