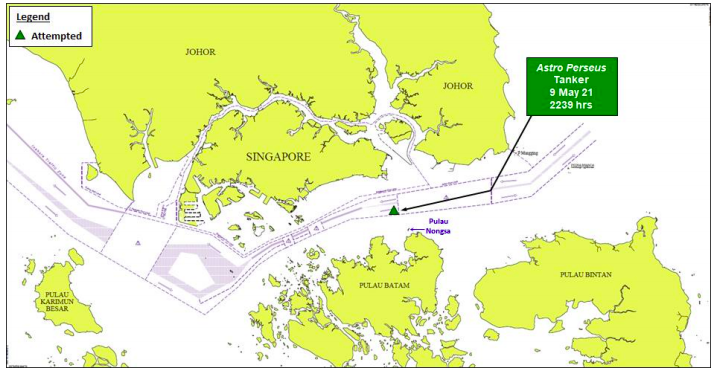 In its weekly report for 4-10 May 2021, ReCAAP ISC informed of one attempted armed robbery against ships in Asia, involving a tanker underway off Batam, Indonesia in the eastbound lane of the Traffic Separation Scheme (TSS) in the Singapore Strait.

With this incident, a total of 13 incidents had occurred in the Singapore Strait since January 2021. The ReCAAP ISC is concerned with the continued occurrence of incidents in the region, and advises all ships to exercise enhanced vigilance and adopt extra precautionary measures when transiting the area.

While the Greek-flagged tanker Astro Perseus was underway on the night of 9 May, approximately 3.1 nm northwest of Pulau Nongsa, Batam, Indonesia in the eastbound lane of the TSS, a small craft was sighted following the ship from the stern.

The perpetrators attempted to board the ship with a hook or rope thrown to the ship, but it failed to reach the ship. The master also made evasive manoeuvres and prevented the attempted boarding.

At 2335 hrs, the master informed the Singapore Vessel Traffic Information System (VTIS) that the search on board the ship was completed with no sighting of any perpetrators. Nothing was stolen and all crew was safe. No assistance was required.

A safety navigational broadcast was initiated. The Republic of Singapore Navy’s Maritime Security Task Force (MSTF) and Singapore Police Coast Guard (PCG) were notified. Information about the incident was shared with the Malaysian and Indonesian authorities.