Attacks against ships increasing in Straits of Malacca and Singapore

In its weekly report for 12-18 May, ReCAAP ISC informed of four incidents of armed robbery against ships in Asia. Τhree of these occurred to ships while underway in the Straits of Malacca and Singapore. The ReCAAP ISC advises enhanced vigilance in the region, since the number of incidents is increasing.

These come in addition to three incidents reported in the eastbound lane of the Singapore Strait within just 15 days, according to a relevant incident alert by ReCAAP ISC earlier in May.

The first incident involved the Indonesian-flagged tug boat SMS Sangatta and supply vessel Winposh Resolve, while about 2.1 nm northeast of Pulau Nongsa, Indonesia, south of the TSS in the Singapore Strait.

The master raised the alarm and reported the incident to Singapore VTIS. At about 2358 hrs, the master updated that the perpetrators had escaped.

The crew was safe and nothing was stolen. The tug boat and supply vessel resumed their voyage. 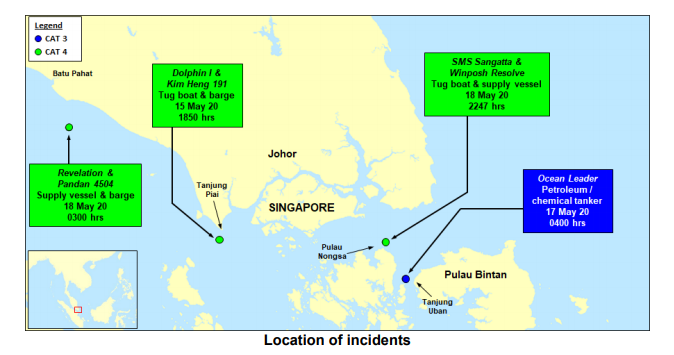 The second incident involves the Kiribati-flagged supply vessel Revelation and accommodation work barge Pandan 4504, while about 5.6 nm south of Tanjung Laboh, Batu Pahat, Johor, Malaysia in the westbound lane of the TSS in the Malacca Strait, in the early morning hours of 18 May.

The boats were identified via AIS system as JHFA 238A and JHF 9496B.

The general alarm was raised and antipiracy warnings broadcasted on the PA system.

The search light was flashed continuously at the unmanned barge. The master initiated broadcast on VHF 16 to Segenting VTS but there was no response.

At 0400 hrs, the perpetrators escaped in their two small boats. The crew was safe and nothing was stolen. The supply vessel and barge resumed their voyage.

The CSO reported the incident to the Singapore PCG. The RSN’s MSTF and the Malaysian authorities were also notified.

The third incident involved the Singaporean petroleum tanker Ocean Leader, while at Tanjung Uban Anchorage, Indonesia, in the early morning hours of 17 May.

While at anchor, the duty crew spotted three perpetrators armed with knives on board the ship.

The general alarm was raised and the crew mustered. Upon realizing that the crew had been alerted, the perpetrators left the ship.

The crew later found a small knife on the deck that was left behind by the perpetrators.

The crew was safe and nothing was stolen.

The fourth incident involves the Comoros-flagged tug boat Dolphin I and barge Kim Heng 191, approximately 2.2 nm southsouthwest of Tanjung Piai, Johor, Malaysia in the westbound lane of the TSS in the Singapore Strait.

While the tug boat towing barge was underway in the afternoon of 15 May, two perpetrators were sighted on the tug boat.

The perpetrators stole two mooring ropes and escaped in a small craft. There was no confrontation with the crew.

The master reported the incident to Singapore VTIS. A safety navigational broadcast was initiated. The RSN’s MSTF, Singapore PCG and the Malaysian authorities were notified.

The crew was safe. No further assistance was required and the tug boat resumed voyage.