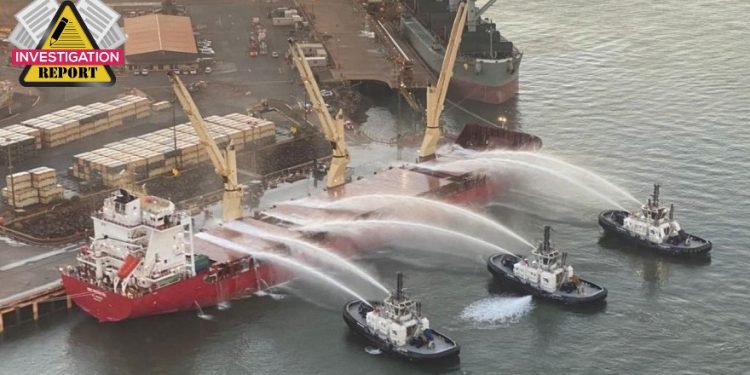 The Australian Transport Safety Bureau (ATSB) issued safety recommendations to the managers and parent company of the cargo ship BBC Rhonetal, following an investigation into a fire in the hold of the vessel at Port Hedland, Western Australia.

While the ship had been at sea, the cargo had been lashed to sea fastenings; metal D-ring brackets that had been welded to the ship’s cargo areas at various locations to keep it from shifting (see the section titled Cargo securing arrangements). These fastenings needed to be removed through hot work such as cutting and gouging before the cargo could be discharged.

After arriving, the ship’s chief mate convened a safety meeting at 0430 to discuss removal of the sea fastenings using a plasma torch and to review the existing hot work risk assessment and procedure.3 This 10-minute meeting was attended by the master, chief mate, second mate, a junior officer, the bosun, two ordinary seaman (OS), two able seaman and two deck cadets. A safety meeting form was printed out and each crew member signed it to confirm their attendance. The chief mate then issued a hot work permit which was to commence at 0500 and remain in effect for the following 24-hour period.

At about 2358 on 24 March, the bosun and an OS, along with the second mate as supervisor, arrived on deck to assume the cargo watch. Shortly after, they started preparations as planned to cut the sea fastenings. In anticipation of this hot work, several crew members on the earlier watch had opened the hatch covers to number two cargo hold and prepared firefighting equipment on the tween deck in the hold.

At 0030 on 25 March, the bosun began using the plasma torch to remove sea fastenings at the forward end of the tween deck. The cutting gradually progressed towards the aft end of the deck. Stevedores followed the bosun’s progress aft, using the ship’s crane to discharge items of cargo as the fastenings were removed. Meanwhile, the OS maintained a fire watch in the lower hold, directly below the hot work progressing on the tween deck. He was ready with a fire extinguisher, two buckets of water, a flashlight and a handheld radio. During this time, the OS saw sparks from the plasma cutting above falling into the lower hold and extinguishing before reaching the bottom of the hold. As the work continued, the second mate remained on the tween deck to supervise and oversee both the hot work and the cargo operations.

At about 0250, the bosun called the OS using a handheld radio and instructed him to conduct a final inspection of the lower hold and then go to the tween deck to assist with removing the sea fastenings. At 0300, having checked that there were no sparks or signs of fire in the lower hold, the OS started working at the forward part of the tween deck, using a grinder to remove remnants of the fastenings left after the plasma cutting.

Meanwhile, the bosun continued using the plasma torch and had progressed to the aft part of the tween deck, located above the plastic-wrapped screen assemblies in the lower hold below. At that time, sparks from the plasma cutting were spreading across a broad area. A smaller quantity of sparks was also generated by the grinding work forward.

At 0309, the second mate on the tween deck saw smoke rising from the aft part of the lower hold. The smoke intensified quickly and began billowing over the cargo hold and the wharf. The stevedores also saw the smoke and quickly left the ship, leaving behind an item of cargo on the tween deck connected to the crane hook in preparation for discharge.

At about 0312, the second mate rushed up to the navigation bridge, sounded the general alarm and made an announcement on the public address system. At about the same time, Port Hedland vessel traffic service (VTS) received a telephone call from security personnel on the wharf reporting the fire. At about 0315, the master and chief mate arrived on the bridge, and the master called VTS via VHF radio and requested harbour tugs to assist the firefighting efforts.

The crew’s attempts to extinguish the fire with hoses were unsuccessful, so the master ordered them to evacuate the hold, intending to use the ship’s fixed carbon dioxide (CO2) extinguishing system for the holds. The hatch covers, however, could not be closed due to the cargo connected to the crane’s hook. A short time later, the chief mate, wearing a self-contained breathing apparatus, climbed up to the crane operator cabin and landed the cargo onto the wharf.

At 0410, on the master’s orders, the ship’s crew closed the hatch covers and then released carbon dioxide into the hold. At about this time, the second mate began feeling unwell due to smoke inhalation and was taken to hospital.

#1 Origin of the fire

Shortly before smoke was observed rising from the lower hold, the bosun had been cutting fastenings with a plasma torch in an area on the tween deck which was located above a vibrating screen assembly stowed in the lower hold. The screen was later identified by firefighters from the Western Australia Department of Fire and Emergency Services as the origin of the fire.

The fire started when sparks and globules of molten metal generated by the plasma cutting fell through gaps in the tween deck and down onto the screen below. The hot material swiftly melted through the protective plastic covering on the screen and then onto its combustible internal components, which ignited shortly afterwards.

The shipboard safety management system (SMS) provided guidance for performing hot work safely. It required fire watches to be in place at all times during the work, including in adjacent compartments where appropriate, and fire rounds to be made for at least 2 hours following the conclusion of hot work.

However, the recall and reassignment of the ordinary seaman (OS) on fire watch to other duties meant that there was no fire watch in the lower hold while the bosun continued hot work activity above. At the time the OS was recalled, there was no sign of fire or smoke in the lower hold. This indicates that the fire almost certainly developed after the OS was recalled and left his post.

Had a continuous fire watch been maintained, it is likely that the sparks and molten metal falling from above would have been immediately identified and smothered by the OS before they ignited the combustible cargo. In the unlikely event that they did catch fire, the OS would have been stationed to promptly raise the alarm and attempt extinguishing the fire with the firefighting equipment at hand.

Hot work practices on board indicated some general awareness of the fire risk associated with removing sea fastenings. This was evidenced by the completion of a hot work permit, availability and deployment of firefighting and fire prevention equipment and assigning a fire watch.

However, no efforts were made to assess or address specific fire risks associated with the flammability of vibrating screens in the lower hold. As a result, the cargo was not protected with specific, effective measures such as fire-retardant coverings and a continuous fire watch.

The evidence shows that this fire resulted because the SMS procedure and guidance were not properly followed. A proper inspection for fire risks at the work site and surrounding areas was not undertaken. The risk assessment procedure was not followed to ensure specific risks associated with the task were identified, documented and mitigated and a continuous fire watch was not maintained for the duration of the hot work. While a safety meeting was held for the planned hot work, it was not effectively executed so as to prepare the crew for carrying out the task safely.

Non-adherence to basic safety precautions and hot work procedures have been a common factor in fires on board Briese ships. The number and frequency of these incidents in recent years, together with the circumstances of this fire, shows that the company had not effectively implemented its SMS procedures across its fleet.

From the evidence available, the following findings are made with respect to the fire within cargo hold number two on board BBC Rhonetal, Port Hedland, Western Australia on 25 March 2021.

#2 Other factors that increased risk

The ATSB is recommending the ship’s managers, Briese Heavylift, and its parent company Briese Schiffahrts, take safety action to ensure safety management system procedures are effectively implemented on BBC Rhonetal and all other relevant ships across their fleets