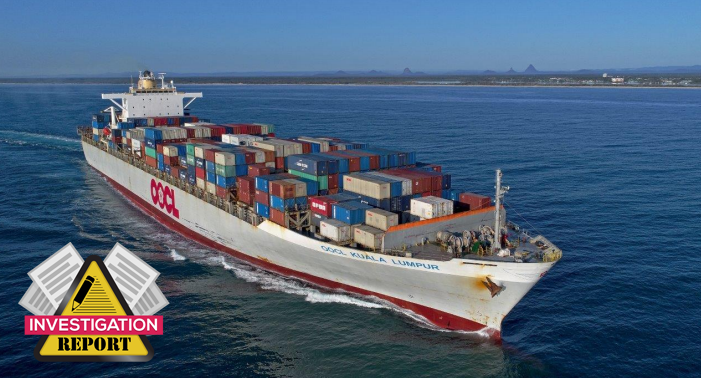 ATSB issued an investigation report on a crew fatality in the elevator trunk on board the container ship OOCL Kuala Lumpur, in June 2018. While driving the elevator from the cage top, the electro-technical officer (ETO) became trapped between the moving cage and the bulkhead, and was fatally injured.

At 0800, while the ship was off Port Botany and preparing for manoeuvring, the master and chief engineer called the elevator so as to go to the mess room several decks below. The elevator did not respond to the call so they used the stairs.

In the mess room they met the ETO and discussed the unserviceable elevator. The ETO advised that he was aware of the fault—the elevator cage doors were not closing because the drive chain sprocket had come adrift and would require refitting. He stated that he would make preparations to repair the fault and discuss with the chief engineer after breakfast.

The ETO went to the elevator machinery room and de-isolated the machinery. He then returned to the second deck elevator landing and gave instructions to the fitter to close the door behind him. He then climbed onto the top of the elevator cage.

The fitter last saw the ETO standing at the back of the cage, atop the elevator cage emergency escape door and behind the operating panel, facing the fitter. He recalled that the emergency stop button was depressed and the elevator control selector switch was in ‘MANUAL’. As instructed, the fitter closed the door.

Soon thereafter, the fitter heard the lift operate, noticed the up and down indicating lamps activate briefly and the landing door handle move. This was followed by impact noises (thuds) and continuous clicking.

In response to the unusual sounds, he attempted to open the access door. However, the landing door interlock mechanism was now engaged and he was unable to open it.

At 0930, in the ECR, the chief engineer decided to check on the progress of the elevator work and went into the engine room.

He went to the elevator landing and saw the fitter attempting to open the door. The fitter explained about the noises he had heard and that he was concerned.

The chief engineer then attempted to open the door. After some effort the door opened. Inside, he could see that the upper section of the door frame and the door closer were damaged.

The chief engineer looked into the elevator shaft and saw the ETO hanging, unresponsive, headdown, from the bottom of the elevator cage, about half a metre above the doorway. He was caught between the cage and the forward bulkhead.

The ATSB investigation found that the ETO was last seen alone, on top of the elevator cage, in the prescribed safe zone with the elevator control in ‘MANUAL’.

The investigation found that safety barriers prescribed in the electrical work permit were not put in place before the work commenced.

All ship’s crew were not warned against using the elevator as there had been no warning announcement and there were no warning signs posted at all elevator access doors.

This allowed an elevator call to be made while the work was underway. Aspects of the supervision and communications throughout the task were ineffective, which meant that opportunities to stop or alter the method of work were missed.

Elevator accidents continue to occur around the world and result in about one fatality per year.

Many of these accidents involved failure to apply existing safety management procedures and/or identified safety barriers that have proven effective in reducing the risks associated with elevator maintenance. These include procedures related to communications, supervision and machinery isolation/lockout.

Furthermore, the injured person was often working alone and riding the elevator cage. For any task that is performed on multiple occasions, there is the potential for an individual’s perception of risk to decrease. This makes it all the more important to always follow documented procedures, even when operation is considered safe.

It is imperative that close and careful supervision is maintained for any elevator testing and tasks. Supervisory oversight provides an opportunity for experienced, senior technical staff to scrutinise and assess the plans and intentions of those completing the task. This provides an external check and safety barrier before, and during, the work. 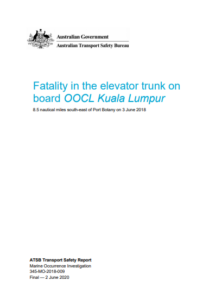