Asian maritime piracy: How will it evolve

The Observer research Foundation (ORF) launched a report focusing on today’s maritime piracy in Asia, analysing where the shipping industry stands, the possibility of piracy in Asia increasing and also measures to improve maritime readiness against piracy incidents.

A former naval officer, Abhijit Singh, Senior Fellow and head of the Maritime Policy Initiative at the ORF, evaluates the possibility of an increase in maritime incidents in Asia, a hypothesis that comes from recent and past attacks in the region. Maritime piracy is a hot topic in the shipping sector, given that violence in the sea is high, particularly in the Sulu and Celebes Sea.

Maritime Terrorism can be defined as ‘the undertaking of terrorist acts and activities within the maritime environment, using or against vessels or fixed platforms at sea, or in port; or against any one of their passengers or personnel, against coastal facilities or settlements, including tourist resorts, port areas and port towns or cities.’

A highlight of piracy incidents in the region was in 2014, the attack on PNS Zulfiqar, a Pakistani frigate, in Karachi. The attack was executed by the Tehrik-i-Taliban Pakistan (TTP) and the Al Qaeda, the attack is a case study of how radicalised militant groups attempt to sabotage a nation’s military assets.

India is also prone to piracy incidents; Although terrorists do not target any Indian shipping or maritime installations, the possibility of an Al Qaeda-inspired attack is far from hypothetical. High-tech equipment is enabling attackers to execute their plans with great precision.

The report notes that Southeast Asia is one of the most ‘attacked’ regions; From 2014 to 2018 there were nearly 200 actual and attempted attacks on ships in the littorals.

The report indicates that it is challenging for regions to deal with the Abu Sayyaf Islamic military group, as its primary area for activity is the Philippine seas, where Manila is less than eager to allow access to foreign maritime forces, resulting in a slowdown of security operations.

Manila has been particularly cautious, fearing that bigger and more competent maritime forces would eclipse the Philippines’ navy and coast guard in its own backwaters.

Yet, regional governments have taken better measures to protect ships and onshore facilities.In many ports, authorities have increased guards, gates, and security cameras, even introducing identification card programs to screen those with access to critical port infrastructure.

The installation of radiation detectors has been particularly helpful in screening critical cargo and identifying suspicious shipments.

Despite the efforts, Asian ports are not able to track and monitor large containers comprehensively. Consequently, it is easier for pirates to use containers to smuggle in arms, explosive materials or the terrorists themselves.

To better deal with piracy incidents, IMO launched the ISPS Code – International Ship and Port Facility Security. The code is divided in two parts; Part A, which is a mandatory section, includes the maritime and port security-related requirements which should be followed respectfully by the governments, port authorities and shipping companies, while Part B provides guidelines on how to meet these requirements.

#The future of piracy

The report notes that:

Concluding, to tackle piracy, regional states need structured and efficient ways of investigating threats, identifying vulnerabilities, and getting stakeholders involved in anti-terrorism processes, and a strong legislation to boost their security measures. 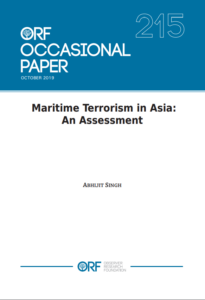