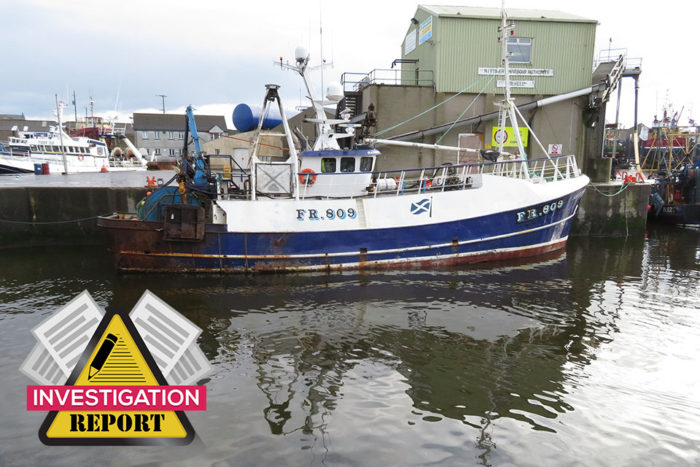 In its latest investigation report UK MAIB focuses on a fatal incident concerning a skipper onboard a UK-registered fishing vessel ‘Artemis’ who fell head-first through an access hatch between the vessel’s wheelhouse and its mess deck 2.1m below, resulting to severe head injuries and died. The report notes that a significant factor of the accident was that the skipper was under the influence of alcohol.

On April 27 the fishing vessel Artemis, having sailed from Fraserburgh called firefly at at Uig, Skye and loaded a new set of nets. During the passage through the Irish Sea, one of the vessel’s diesel generators failed and, after discussion with the owner, the skipper decided to stop at Kilkeel to conduct a repair.

On April 29 engineering contractors boarded the vessel to repair the generator. When everything was fixed, Artemis’s skipper and engineer went ashore to consult the harbor master about the best time to sail. The harbor master advised the skipper to wait until at least 2½ hours before high water before getting underway, to ensure that he had sufficient height of tide to allow the vessel to safely clear the sand bar in the harbour entrance. Following this advice, the skipper returned to Artemis and informed the crew that the vessel would sail at 1900 that evening.

Following, at 1247 the skipper along with one of his deckhands left the vessel to visit a local public house for a drink; After three hours of drinking whiskey and beer they both headed to the vessel. When they arrived at the ice berth they climbed down the quayside ladder to the fishing vessel’s foredeck. They then proceeded aft, to the wheelhouse.

The deckhand entered the wheelhouse and went to the galley to make a cup of tea, whereas the skipper remained on the upper deck to smoke a cigarette.

According to the report, at about 1630 the deckhand heard a loud noise and as they turned their head to see what was happening, they saw the skipper falling head-first through the wheelhouse hatch and hit the deck below. He immediately went to his aid but could not find any sign of life.

In light of the accident, the deckhand rushed to the wheelhouse to raise the alarm, calling Kilkeel harbor through VHF radio channel 12. Repeating the calls twice the deckhand received no answer and returned to check on the skipper.

Still unable to find sign of life, he returned to the wheelhouse for a second time and raised the alarm on VHF radio again. This time, his call was answered by another vessel and was relayed to the harbourmaster and emergency services

The Kilkeel harbourmaster rushed straight to Artemis and went on board to examine the casualty. He noted the skipper had suffered a severe head injury and could find no sign of life. Shortly afterwards, the coastguard arrived.

At 1703, an ambulance arrived on the quay and two paramedics boarded Artemis. The skipper was declared deceased at 1705.

Regulation VIII/1, Code A-VIII/1 and B-VIII/1 of the STCW Convention, as amended in June 2010 (the Manila amendments), brought in new provisions on fitness for duty – alcohol limits.

Following the severity of the accident, UK MAIB published a safety flyer to alert all those working in the fishing sector, highlighting the lessons to be learned from this accident.

While limited alcohol consumption by crew living on board fishing vessels when in port and of duty might be considered acceptable, excessive consumption will severely undermine an individual’s judgement and coordination. 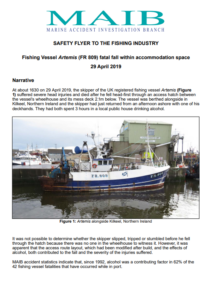 To learn more on the investigation report click herebelow 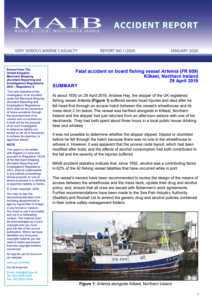