Argentina: Seven ships stranded in low waters to be towed free from Rosario

by The Editorial Team
in Alerts, Shipping 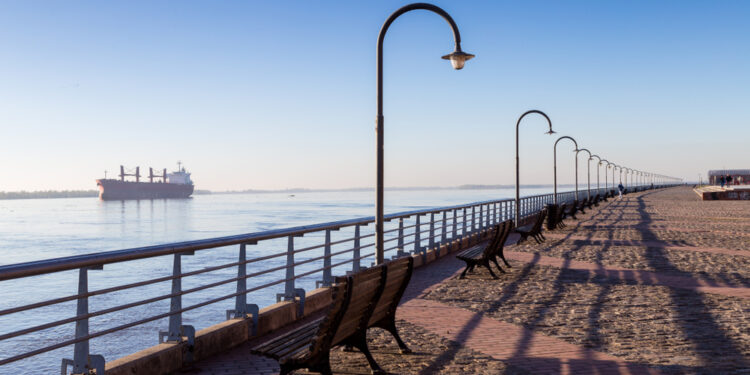 Parana River from the Riverside park in Rosario / Above image is used for illustration purposes only / Credit: Shutterstock

Seven grains ships stranded at Argentina’s export hub of Rosario due to shallow river waters will be towed free and sent out to sea, according to local authorities. The ships have started leaving on Saturday morning.

The ships were unable to embark because they had been loaded with more cargo than could be carried on the port’s increasingly shallow waters, on the aftermath of a 48-hour strike by tugboat captains and other workers at the port last week, Reuters reported.

There was a meeting between the transportation ministry, the Coast Guard and the river pilots, and they agreed to tow the ships out,

…Guillermo Wade, manager of Argentina’s Chamber of Port and Maritime Activities, was quoted as saying.

Once the ships are towed to the main channel of the Parana River, they will be able to sail south past Buenos Aires to the Atlantic.

The historically low waters in Parana River remain critical, with Paraguay and Brazil agreeing to release water from the Itaipu dam in order to facilitate barge traffic that had been stalled.

Meanwhile, the strike will not be over unless union demands over access to COVID-19 vaccines are met, unions said. Unions representing port workers say they should be classified as “essential” in order to qualify for COVID-19 vaccines.