Another two armed robberies to ships in Singapore Strait

In its weekly report for 19-25 November, ReCAAP ISC informed of three incidents of armed robbery against ship in Asia. One was CAT 3 and two were CAT 4 incidents. Two of them occurred to ships while underway in the Singapore Strait, which has been at the center of maritime security warnings in recent months.

While underway, five perpetrators armed with two long knives were sighted in the engine room. The crew immediately raised the alarm and the perpetrators escaped.

The crew followed up with search for any missing items and perpetrators onboard.

The master later confirmed that there were no perpetrators onboard. He reported the incident to Singapore Vessel Traffic Information System (VTIS). The ship resumed her voyage to Incheon, South Korea and crew was safe.

The second incident involved the Singaporean-flagged product tanker ‘Maersk Borneo’. While at berth at Belawan Port, Indonesia, the duty watch keeper noticed one perpetrator trying to board the tanker using ropes with hook.

The perpetrator escaped when the duty watch discovered his presence. The lower platform of the accommodation ladder was reported stolen. No damage to the ship and the crew was not injured. 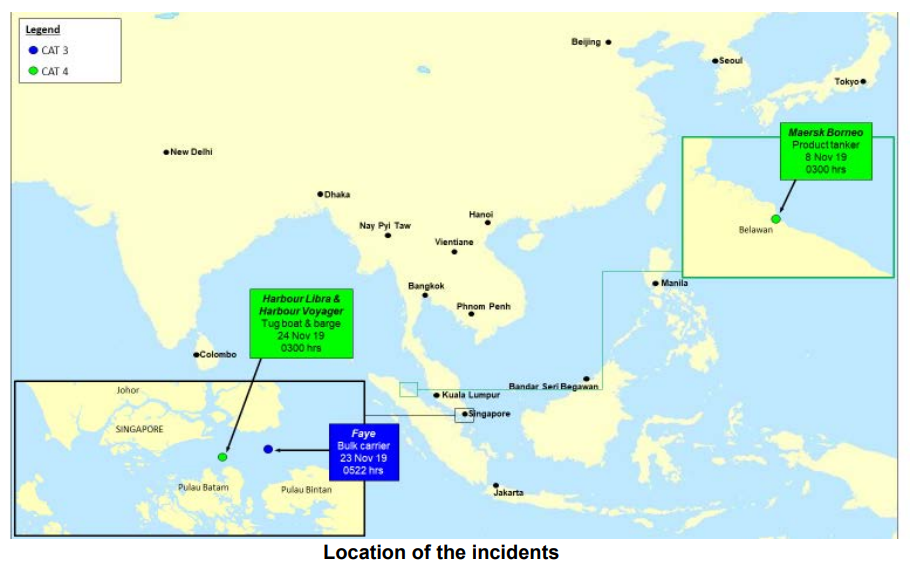 The third incident involved the Malaysian-flagged tugboat ‘Harbour Libra’ while sailing approximately 2.2 nm northwest of Pulau Nongsa, Indonesia, in the eastbound lane of the Traffic Separation Scheme (TSS) of the Singapore Strait, on 24 November.

Some twist locks and ropes were stolen. The master reported the incident to Singapore Vessel Traffic Information System (VTIS). The crew was not injured and the ship resumed her voyage to Port Sibu, Sarawak.

In its recent report for the first nine months of 2019, the ReCAAP ISC expressed concerns about the increase in the number of incidents reported onboard ships while underway in the Singapore Strait.

Only in January-October 2019, three incidents of unauthorized boarding of ships in locations of close proximity to each other were reported in the western sector of Singapore Strait.