Anchorages and Fatigue: The worst-case scenario? 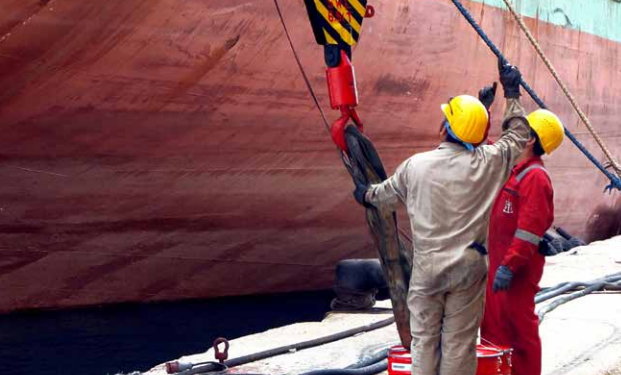 Credit: Thetius / Image hereabove is being used for illustration purposes only

It is well established that arriving at the port, berthing and cargo operations are highly fatiguing. This is especially true of ships where the Master may also stand a watch and may be required to navigate the ship into and out of ports because no pilot is present, writes Prof. Andy Smith, School of Psychology, Cardiff University.

Indeed, even in cases where a pilot is present, the Master will still be on the bridge and in control of the ship. Not all ports involve a single berthing operation. Some ports, especially in Asia, have a series of anchorages that vary in water depth. The ship is initially moored in the deepest water, and barges pull alongside and unload until the ship can move into the next anchorage with shallower water.

There may be many potential problems in the anchorages. First, anchorages are often situated in places that are difficult to navigate (e.g., between sandbanks; uncertainty about available depths; unknown wrecks and other uncharted objects), and the presence of other moored vessels makes navigation difficult. Once anchored, there may be strong tides or currents and securing barges increases the drag on the anchor.

Port control requires five cables between vessels, which may be difficult if other ships are dragging their anchor. The unloading of the cargo has to be monitored, which may interfere with sleep. There is often a lack of communication with port authorities about moving to the next anchorage, although launches with customs officials or agents may approach the ship. There may also be a risk of piracy.

Prolonged manoeuvring means that the act of moving to a new anchorage is far from simple. This will add acute stress and fatigue to the chronic fatigue of the Master, who is likely to be the main OOW due to other watchkeepers lack of experience with such conditions. Indeed, when a ship is in distress, it is improbable that the Master will allow someone else to navigate. Acute fatigue can be counteracted by compensatory effort. However, this effort cannot be sustained for long periods, and eventually, the Master will lose situational awareness, take more risks and be less able to sustain attention and respond appropriately.

This pattern of behaviour means that even straightforward actions will eventually not be performed appropriately. This pattern of behaviour has been confirmed onshore with studies of driving, where the driver may initially counteract fatigue but when the potentially fatiguing part is over cause accidents due to elementary mistakes. These final incidents appear to reflect incompetence unless one follows the pattern of fatigue induced by early actions. Indeed, investigations and legal judgements may decide that fatigue is not involved because the Master did not fall asleep. However, fatigue leads to awareness and response being out of sync and anticipation of future problems is reduced.

Anchorages are generally unsafe, and there are frequent collisions and groundings which arise from dangers that cannot be avoided by the practice of good navigation and seamanship. This has been acknowledged in specific ports and action taken to prevent such incidents. For example, in October 2018, the port of Chittagong attempted to increase safety because there had been a large number of incidents. These new regulations included the following:

The above regulations would appear to be appropriate first steps for making it a safer port. However, it is unclear whether they are enforced or prevent all of the dangers to safety listed above. In addition, there are likely to be other anchorages that still do not have such regulations. Up to date information of recent experiences in these anchorages is required to determine whether the above account is still accurate or whether concern about safety is making it a thing of the past.

Professor Andy Smith is Director at the Centre for Occupational and Health Psychology, School of Psychology, Cardiff University. He has conducted extensive research on fatigue and one of his current interests is transport fatigue, especially seafarers’ fatigue.