An overview of potential MBMs under IMO initial GHG strategy 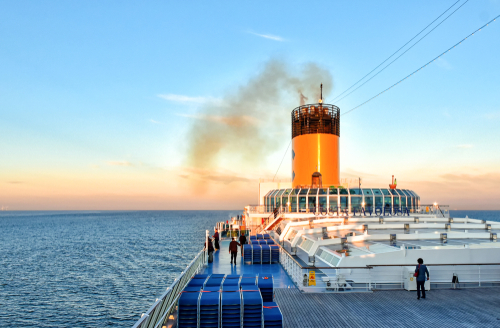 In this context, some related developments are also seen as directly relevant to the scope of the project, mainly in the context of the possible inclusion of shipping into the EU Emissions Trading System (ETS).

In 2010, an Expert Group was tasked to evaluate as many as 11 separate MBM proposals, submitted by various member states and other organizations. All MBM proposals described programs and procedures that would target GHG reductions through either ‘in-sector’ emissions reductions from shipping, or ‘out-of-sector’ reductions via the collection of funds to be used for mitigation activities in other sectors that would contribute towards global reduction of GHG emissions.

MBM proposals submitted to the IMO were the following:

The following developments took place after the above MBMs were submitted to the IMO: 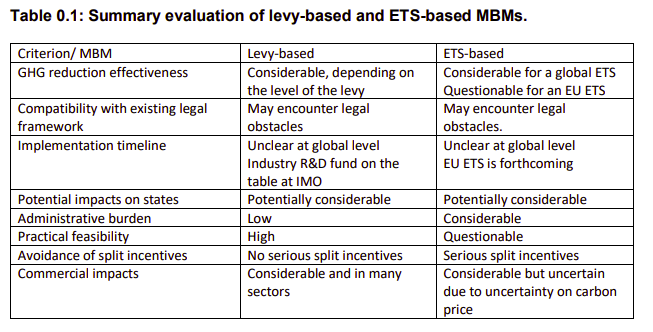 The report stresses that MBMs have been included in the Initial IMO Strategy of 2018 as a candidate medium-term measure (to be finalized and agreed to between 2023 and 2030), as follows: “New/innovative emission reduction mechanism(s), possibly including Market-based Measures (MBMs), to incentivize GHG emission reduction.”

Note the word “possibly”, which means that the fate of MBMs at the IMO is currently unclear.

However, the ill-fated discussion on MBMs in 2010-2013 has made IMO interest on MBMs currently limited, but this may change as some Member States, such as France (2018), Small Island Developing States (2018), UK (2020) and the Marshall Islands and Solomon Islands (2020), have asked for the MBM discussion to reopen.

However, other Member States seem opposed to the MBM idea, so at this point in time there is uncertainty on what the future may hold for MBMs at the IMO,

This comes as reducing maritime GHG emissions via offsetting is not included in the Initial IMO Strategy, at least explicitly, which means it is unclear if the IMO would allow discussion on an MBM that embeds carbon offsetting, if and when the MBM discussion resumes, and assuming that such an MBM is put forward.

The use of monies collected under any MBM is anticipated to involve a serious discussion, and it would seem that such use in carbon offsetting activities cannot be a priori ruled out. Also it should be noted that offsetting was the intended main driver behind the GHG Fund MBM proposed by Denmark et al. in 2010.

Meanwhile, in 2019, the new President of the European Commission revealed that shipping would be included in the EU ETS -an MBM itself-, under the “European Green Deal”. Although, initially, the position of the Commission had been to align itself with the IMO process on decarbonization, this has changed as of December 2019, and the European Green Deal clearly points to the ETS path for shipping. It is still not clear how this will be implemented.

It should also be mentioned that even though no maritime MBM currently exists, the shipping industry may have missed, by a sheer twist of fate, the chance to witness firsthand a real-world “experiment” on the short-term effects of an MBM.

Indeed, the anticipated fuel price increase due to the implementation of the global 0.5% sulphur cap as of 1st January 2020 would be in many respects tantamount to a bunker levy. Under normal circumstances, these higher fuel prices might result in lower speeds and therefore lower GHG emissions.

See also: Fuel standard should be geared towards fuel suppliers and not ships, says ECSA

However, the outbreak of COVID-19 just after the start of the 0.5% sulphur regulation collapsed fuel prices across the board and the above “experiment” never happened. In fact, COVID-19 resulted in phenomena such as containerships on the Far East to Europe route sailing the longer route around Africa at increased speeds as it was cheaper to do so in lieu of paying the Suez canal tolls, and increasing per trip GHG emissions in the process.

So to anybody who thought that the global sulphur cap would provide an opportunity to see what an MBM could do, that opportunity was missed.