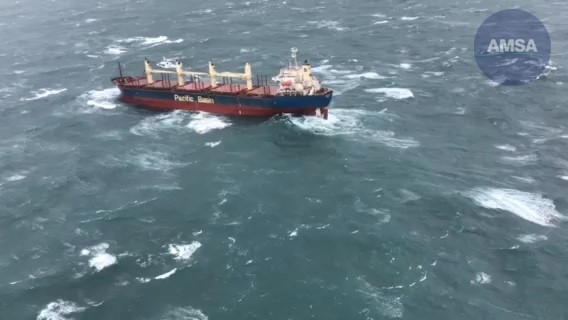 Following the incident in which ‘Portland Bay’ handysize lost power in a storm couple days ago, the Australian Maritime Safety Authority (AMSA), as Maritime Emergency Response  Commander, issued a legal direction to the ship’s master of the MV Portland Bay and salvage team that the vessel must be moved to a berth in Botany Bay today.

The MV Portland Bay has been anchored off Cronulla Beach since early Monday evening  after breaking free from towing cables attached to smaller tugs which had been attempting to move the vessel away from the shore.

Bad weather preventing the movement of the vessel into harbour has now subsided. The
vessel must comply with the direction to move to harbour today as more bad weather is
forecast for Thursday.

AMSA has been working closely with the appointed salvor to task emergency towing vessel
Glenrock in combination with other tug assets supporting the vessel, to move the MV
Portland Bay to assist with repairs to the stricken vessel.

The Glenrock arrived on the scene from Newcastle yesterday morning and has large vessel
towing capability which can safely move the stranded Portland Bay into a harbour berth.

AMSA Executive Director Response Mark Morrow said “We are expecting the Portland Bay
to be moved as early as possible today utilising the Glenrock which has now secured towing
cables. It is vital that the vessel be moved into safe harbour before the next front of bad
weather arrives tomorrow.”

We have tasked the Glenrock, a large emergency towing vessel with deep sea capability to assist in stabilising the MV Portland Bay. It arrived from Newcastle on scene this morning. Photo: courtesy @svitzerau pic.twitter.com/O5p7KyLIeb

“As always, we want to ensure that the crew are safe and the vessel can be made sea
worthy while the next east coast low passes through the region.

“We will continue to work with the NSW Port Authority to ensure this happens as soon as
possible.”

“Those smaller tugs have done amazing work over the past 24-36 hours ensuring the
stricken vessel did not drift onto some of Sydney’s most pristine coastline.”

The MV Portland Bay left Port Kembla on Sunday 3 July and experienced engine failure 1.2
kms east of Garie Beach, NSW on Monday morning. The vessel has 21 people on board.