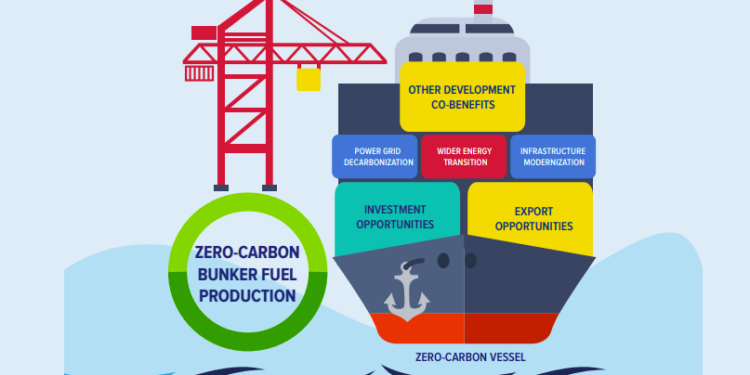 “Green” ammonia, closely followed by “green” hydrogen, is likely the most advantageous bunker fuel for ships, in terms of the lifecycle GHG emissions, broader environmental factors, the scalability, the economics, and the technical and safety implications of each fuel, according to a new report from World Bank.

Ammonia or hydrogen also have the advantage of having multiple production pathways, providing a significant strategic advantage that alleviates concerns about capacity limits and technology issues, the “Volume 1: The Potential of Zero-Carbon Bunker Fuels in Developing Countries” report unveils.

Ammonia appears preferable over hydrogen because hydrogen is expensive to store and handle, particularly onboard a vessel. However, ammonia is toxic to humans and aquatic wildlife. Fortunately, ammonia is already an important globally traded commodity. Therefore, meeting challenges associated with its safe storage and handling onboard a vessel will be achievable through the application of appropriate protocols, compliance with technical standards, and use of safety equipment.

The same report concludes that both biofuels and synthetic carbon-based fuels are not expected to become the major power source for achieving shipping’s future zero-carbon energy needs.

Without a breakthrough in aquatic biomass production, biofuels are likely constrained by their feedstock availability, the potential high demand across multiple sectors of the global economy, and the resulting uncertain supply-and-demand price dynamics. Synthetic carbon-based fuels are penalized by their very high costs relative to other alternatives due to multiple energy-intensive steps involved in their production,

In addition, the report has deployed a new methodological approach that seeks to understand, at a global scale, which countries are likely to be well-positioned to produce future zero-carbon bunker fuels for the maritime industry. It finds that many countries, including developing countries, are very well-situated to become future suppliers. Well-positioned countries tend to be those endowed with many of the natural resources required to produce the zero-carbon fuels, combined with favorable access to a large volume of shipping activity.

Four developing countries have been selected for further high-level case studies: Brazil, India, Mauritius, and Malaysia. These case studies discuss the implications of each country becoming a potential future producer of zero-carbon bunker fuels in its regional market.

Considering a range of hypothetical ammonia supply scenarios, the capital expenditure requirements have been estimated for each country selected:

Further future work will be required for assessing which countries may be well-positioned as future fuel suppliers, focusing, for instance, on the following aspects: