Ammonia-fueled system to be tested on barge 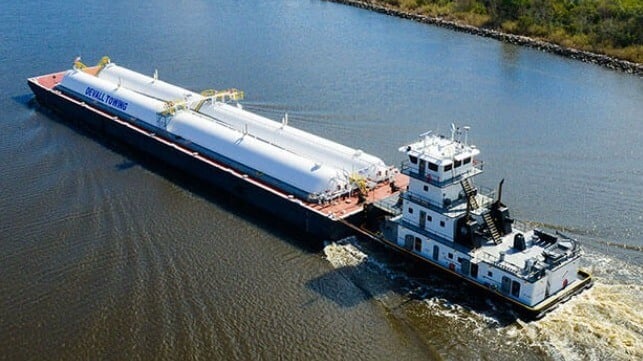 Amogy announced a strategic partnership and technology deployment project with Southern Devall, for the former’s ammonia-to-power system to be integrated into a tank barge.

With the successful integration of Amogy’s technology in a tank barge for the first time, this collaboration with Southern Devall will facilitate the commercial debut of Amogy’s ammonia-to-power technology in the global maritime market.

Amogy’s proprietary ammonia-to-power system converts ammonia into hydrogen for use in fuel cells or as a more energy-dense method of long-distance hydrogen transportation.

The system, already demonstrated in a farming tractor and aerial drone, is now being scaled for larger applications, including ships and ammonia bunkering barges to support the maritime industry’s decarbonization efforts.

Amogy and Southern Devall have started work on their first technology deployment, a retrofit of a barge that is anticipated to be completed by the end of 2023.

An Amogy powerpack will generate the power needed to reliquefy ammonia as it heats up throughout a voyage, instead of a diesel genset. The Amogy system will keep the ammonia tank pressure low, enabling Southern Devall to deliver ammonia to customers upon arrival and increase the utilization and profitability of their fleet.

Following the barge integration and demonstration, Amogy and Southern Devall plan to pursue retrofits of additional barges and tugboats, creating an ammonia-powered fleet that includes cargo transportation vessels as well as bunkering barges for efficient, emission-free refuelling of ammonia-powered ships.

In collaboration with their team, we’ll have a first-mover advantage in this space through expanded access to the ammonia infrastructure and industry knowledge, setting us on track to demonstrate our platform’s operational capabilities in large maritime vessels