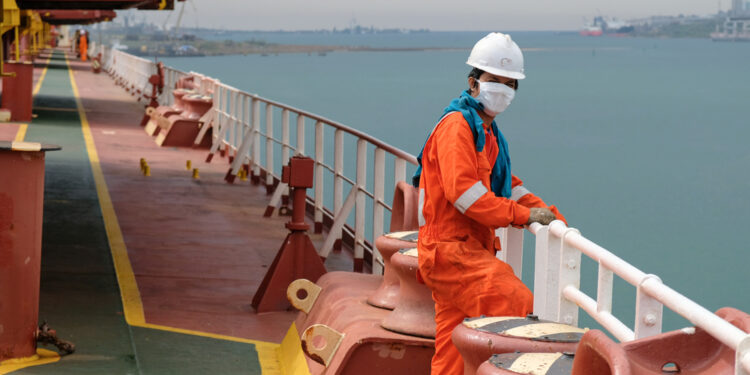 In its most recent report, Allianz notes that the crew change crisis continues to have a major impact on the health and wellbeing of seafarers, with potentially long-term implications for safety.

Covid-19-related travel and border restrictions, and the widespread suspension of international flights, have significantly impacted the ability of ship operators to conduct crew changes. Between March and August 2020 only 25% of normal crew changes were able to take place (ICS) while at least half a million seafarers have been affected.

As of March 2021, it is estimated that some 200,000 seafarers remained on board commercial vessels, unable to be repatriated and past the expiry of their contracts, with a similar number of seafarers urgently needed to join ships to replace them. On any given day, nearly one million seafarers are working on some 60,000 large cargo vessels worldwide, according to the IMO.

Timely crew changes are vital to the safe operation of shipping, and seafarers spending extended periods on board are more at risk of mental health issues, exhaustion, fatigue, anxiety and mental stress.

He also adds that there needs to be a global collaborative effort to get crews off ships. However, the industry also may need to take measures to give crew some respite, such as adjustments to working hours.

Crew changes are also a compliance risk. According to the International Labour Organization (ILO) Maritime Labour Convention (MLC) crew should serve no more than 11 months continuously at sea and are entitled to access onshore medical facilities and care. According to the IMO, Covid-19 has caused many seafarers to serve significantly longer than the 11 months agreed by the ILO. If ships are unable to operate safely in compliance with international rules, vessels may have to suspend their operations.

The ongoing crew crisis is likely to have long term consequences for the shipping industry, according to Captain Andrew Kinsey, Senior Marine Risk Consultant at AGCS:

With hundreds of thousands of crew members stuck on board vessels or on extended contracts, I have serious concerns for the next generation of seafarers. The situation with Covid-19 means that we are not training and developing them, while the sector may struggle to attract new blood due to current working conditions

The mental health and wellbeing of seafarers is a massive issue that desperately needs to be dealt with. While there is recognition of the problem – as seen in the Neptune Declaration – this issue cannot be dealt with by the shipping industry alone and can only be solved in partnership with governments and other stakeholders

Nevertheless, Captain Khanna notes that a global vaccination programme is likely to be the answer to the crew change crisis, although the situation is complicated by the international nature of shipping.