Alcohol the main contributing factor in fatal US boating accidents

Alcohol continued to be the leading known contributing factor in fatal boating accidents in 2018, accounting for 100 deaths, or 19% of total fatalities.

While these decreases are encouraging, there are still too many deaths and injuries that could be avoided through the use of life jackets and eliminating alcohol consumption while operating a boat

according to Capt. Scott Johnson, chief of the Office of Auxiliary and Boating Safety at Coast Guard Headquarters.

In fact, half of a boating party perished in Alabama in July 2018 when an inebriated passenger bumped into the operator, who had also been drinking, which caused the operator to swerve and crash into a bridge piling at about 25 mph.  Two people were killed, including one who was struck by the boat’s propeller. The operator had a blood alcohol concentration level of 0.15, which is nearly twice the state’s legal limit of 0.08.

Where the cause of death was known, 77% of fatal boating accident victims drowned. Of those drowning victims with reported life jacket usage, 84% were not wearing a life jacket.

It’s so important for a boater to always wear a life jacket and to make sure that it is serviceable, properly sized, and correctly worn. He noted that a number of deaths involved inflatable life jackets that had expired cartridges or life jackets that were not buckled, thus making them ineffective as lifesaving devices

Moreover, where boating instruction was known, 74% of deaths happened on vessels where the operator had not received boating safety instruction. USCG recommends that all boaters should take a boating safety course that meets the National Boating Education Standards, before getting out on the water.

What is more, the most common vessel types involved in reported accidents were open motorboats, personal watercraft, and cabin motorboats. Where vessel type was known, the vessel types with the highest percentage of deaths were:

Other findings of the report, state that:

Where length was known, eight out of every ten boaters who drowned were using vessels less than 21 feet in length;

The Coast Guard reminds all boaters to boat responsibly on the water: wear a life jacket, take a boating safety course, attach the engine cut-off switch, get a free vessel safety check, and boat sober 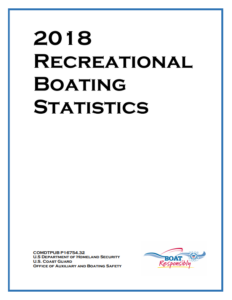