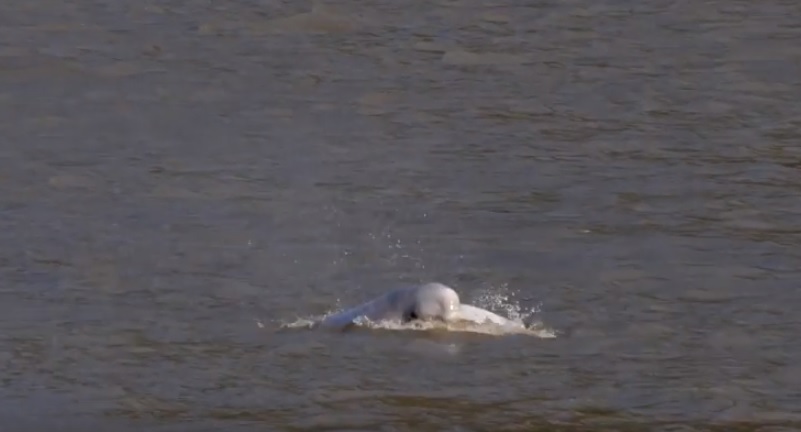 The proposed construction by Alaska Gas Development Corporation (AGDC) of a LNG pipeline and terminal in Cook Inlet, Alaska, could expose nearly half of the population of resident endangered beluga whales to dangerous levels of noise, according to non-profit Environmental Investigation Agency (EIA).

As informed, halfway through the public comment period for the project, the draft application was deleted and a new version was published with calculations that resulted in dramatically reduced impacts to belugas. The revised figures make the application much more likely to be approved by the National Marine Fisheries Service. EIA Policy Analyst Daniel Hubbell noted:

We have serious concerns about the discrepancies between AGDC’s draft application and the final application and how they were able to arrive at such different conclusions regarding the impact of their activities on belugas given that the project has not changed much if at all.

There are an estimated 328 belugas in Cook Inlet and the population is listed as critically endangered. Scientists do not know why they are not recovering, but they have identified noise as a high level threat. The AGDC project, which is an 800 mile pipeline, proposes 101 total days of pile driving in the Inlet, among other noise-related impacts, in areas in or near critical beluga habitat.

The Marine Mammal Protection Act prohibits the harming, harassing or injuring of beluga whales, unless it can be demonstrated that only “small numbers” of whales will be harmed and that it will have a “negligible impact” on the species or stocks. The National Marine Fisheries Service (NMFS) in the past has approved takes for Cook Inlet belugas not exceeding 10% of the population.

AGDC’s final proposal requests an annual take of 32 beluga whales, exactly 10% of the population, from 2019-2024. But for over half of the required 30-day public comment period, a draft version of AGDC’s plan was posted on the website. In the earlier draft obtained by EIA, AGDC estimates as many as 151 whales would be exposed to dangerous levels of noise.

However, EIA suggests that taking even 10% of the Cook Inlet beluga population is too high given its fragile status:

No matter how you look at it, this project is a danger to the beluga whale’s recovery and until this population’s decline is better understood NOAA Fisheries should reject AGDC’s application.