The ship breaking activity in developing countries, such as India, Bangladesh and Pakistan, has been subject to criticism because of the negative impacts the industry has on the environment and workers. Now, a report by the Tata Institute of Social Sciences (TISS) in Mumbai found that there has been little improvements in the shipbreaking yards with regards to working conditions. It also presents several breaches of the national legal framework.

According to the report, there is no lack of labour laws to protect and improve the working conditions and ensure the welfare of workers at the ship breaking yards in Alang-Sosiya (ASSBY). However, the implementation of labour laws and various government appointed committee recommendations have not been effectively applied by different state government departments in Gujarat.

Despite a number of initiatives by the GMB towards the development of ship breaking activities in Alang, the GMB is failing to monitor ASSBY and to provide adequate facilities and infrastructure in the ship breaking yards

A particular concern is that there is no data base about the number of workers in the ship breaking yards. Additionally, the presence of multiple government agencies has not made a significant impact in controlling the behaviour of ship breaking industries to ensure better working conditions. As a matter of fact, there is a lack of effective implementation of both labour and environmental laws in ship breaking industries both by the Central and State Government of Gujarat.

Another area of concern that the report is focusing on, is that there is little space to raise the workers’ voice in the decision-making process, along with no effective platform to organise them for their collective action to assert their rights.

Moreover, the report notes that a key weakness in addressing and resolving workers’ rights at ASSBY is the absence of an active and strong trade union to represent the interests of workers. The trade unions in Gujarat have not taken active interest in mobilising workers and representing their interests to the different government departments.

Living conditions of the workers

The report underlines that there are strong environmental and safety arguments for moving the ship breaking industry to more appropriate locations where heavy lifting equipment and pollution containment can be ensured. To achieve that, it recommends the following suggestions: 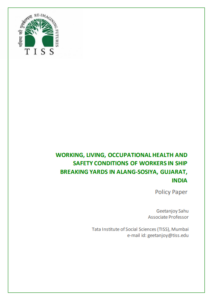