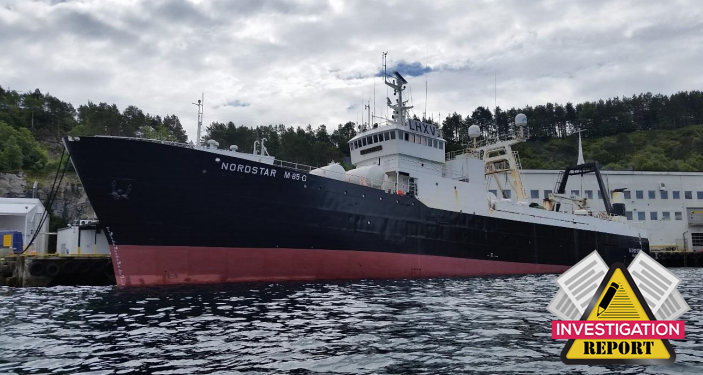 Accident Investigation Board Norway released its report on a 10 June 2018 incident, when a crew member died on board the factory trawler Nordstar in connection with preparations for cleaning a silage tank.

The factory trawler Nordstar was on its way to Ålesund after fishing in international waters west of the Reykjanes Ridge. The vessel was to be made ready for fishing for another type of fish (from redfish to white fish) during the voyage, and the crew had finished cleaning the factory on the morning of 10 June 2018.

Later in the morning, the skipper instructed the factory supervisor to prepare the silage tanks for cleaning. This meant flushing the tanks by filling them with seawater and emptying them several times, before lowering a fan (not explosion proof) into the tank to blow in fresh air and lead air out of the tank via the attached plastic hose. According to the skipper, he had given instructions that the fan was to be lowered using a rope in the same way as had been done on two previous occasions during the voyage when crew members entered diesel tanks in connection with cleaning.

The factory supervisor started to prepare the tanks at about 11 o’clock. There was water in the tanks, but the amount is uncertain. He started by pumping all the water out of the forward starboard tank, then filled it with 40–50 m3
of water, before emptying it again. The factory supervisor did not have time to finish before the watch changeover at 14.00, but the forward starboard tank had been emptied.

The other fisherman started rigging the fan and hose. When the equipment was ready, the fisherman who had the oxygen detector said that he would go down into the tank to place the fan correctly. He had a torch and a portable oxygen detector with him when he entered the tank. After climbing part of the way down, the fisherman shouted to his colleague who remained on deck that there was a lot of silage residue left in the tank; he then proceeded down to the bottom of the tank. His colleague has stated that he could tell from the look on the face of the fisherman inside the tank that something was wrong, before he said that ‘there is no air here’. The fisherman inside the tank jumped back onto the ladder and climbed a few steps before he suddenly fell backwards and landed at the bottom of the tank, where he lay face-down in the silage residue.

It is likely that the fisherman was quickly exposed to immediately lethal levels of gas as he climbed down to the bottom of the tank. It was a demanding job to get the fisherman up from the tank.

The investiation also shown that the risk of gas being formed during the production and storage of silage had not been identified as a hazard in the shipping company’s safety management system.

What is more, knowledge of the hazards associated with the formation of gas when fish waste/silage decomposes was not transferred in an effective manner from the other parties in the project to the shipping company, and nor were they identified by the shipping company or the supervisory authority (the Norwegian Maritime Authority) during the operating phase of the project.

Moreover, the hazards associated with gas formation were not mentioned in the shipping company’s risk assessments, checklists or work procedures. Tanks with contents that represented a potential gas hazard were not sufficiently labelled, and equipment for detecting hazardous gas was lacking. This contributed to a situation where personnel carrying out work on storage tanks and those responsible for approving such work were unaware of the potential risks to which they were exposed. The crew also lacked sufficient emergency preparedness training and training in how to rescue people from a tank.

The shipping company has implemented several measures since the accident.

The shipping company’s expectations that other parties would assist by providing detailed information about the hazards associated with silage production and work in tanks was not in agreement with the parties’ own understanding of their role in the project. This resulted in risks associated with the production and storage of silage not being identified or taken into consideration in the plant’s operation.

Nor did the NMA’s audit detect that the operational hazards associated with silage production and storage were not mentioned in neither the shipping company’s nor in the vessel’s safety management system.

The investigation of the accident on board the Nordstar on 10 June 2018 has not identified new areas in which the Accident Investigation Board Norway deems it necessary to propose safety recommendations for the purpose of improving safety at sea. 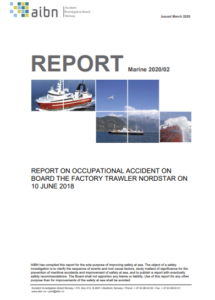