Toxic-laden ship heads to India after being banned in Bangladesh 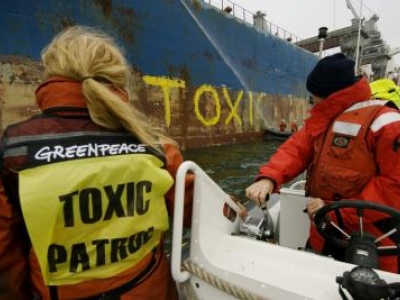 The ship contains many tonnes of hazardous asbestos, toxic paints and fuel residues

After being banned in Bangladesh, a toxic-laden ship, Probo Koala, is headed towards Indian shores for dismantling, a global group of activists called ‘NGO Shipbreaking Platform’ has warned.

The ship has been in the thick of controversy in Africa and Europe. Its previous owner, a company called Trafigura, tried to offload its on-board toxic material in Amsterdam. It was detected in time and when the authorities imposed heavy charges for proper disposal, the company decided to instead send the ship to Africa.

After trying its luck in Nigeria, the company finally found a dealer in Ivory Coast to dump the chemicals off board. Hundreds of tonnes of toxic chemicals were poured into the country’s largest city, Abidjan. NGO Shipbreaking Platform said the toxic dumps lead to the death of 16 people and thousands of people falling ill.

The ship, environmentalists warn contains many tonnes of hazardous asbestos, PCBs, toxic paints, fuel and chemical residues which have not been cleaned up before sending the ship for breaking down. Activists have been demanding for years that ships owned by companies in the developed world should be rid of all toxic material before being sent to shipyards in poorer countries. But the global shipping companies, vary of the costs involved, have preferred not to do so on several occasions.

While the Basel Convention, an international treaty, prevents rich countries from transporting hazardous waste and chemicals to developing countries without prior information, the shipping firms and those in the market for dismantling old ships get around the treaty quite easily. The ships are registered in developing countries under shell companies carrying what are called ‘flags of convenience’ which permit them to bypass the treaty.

The Probo Koala is registered in Panama. The last confirmed owner of the ship was a group called GMS, which has faced charges of trying to smuggle out another dirty ship in the US. The ship, Oceanic, finally reached India for breaking.

GMS also made an out of court settlement with the US Environmental Protection Agency (EPA) and paid more than half a million dollars.India has also faced two high profile cases — those of Clemenceau and Blue Lady — though the shipyards at Alang continue to break hundreds of ships even after that.

Besides India, Bangladesh, Pakistan and increasingly China have become the world’s junkyards for retired ships. In developed countries, laws and the costs involved make dismantling ships a prohibitive exercise. The low cost of labour, lax standards and even worse monitoring has made South Asia a ship-breaking hub. An added attraction is the steel taken out of these ships, which comes in handy for the insatiable markets in Asia.

China has been gaining in the market for junk ships by setting up modern facilities, unlike those in India. Ritwick Dutta, the Indian representative of NGO Shipping Platform has warned that after Bangladesh banned the entry of the ship, its most probable destination is India.

“Shipbreaking takes place directly on tidal beaches such as the one at Alang, which makes the safe use of cranes and emergency access impossible. The ships are broken down by hand, their structure cut open by igniting cutting torches,” he told us.

“India does not seek certificates from owners on the ship having been cleaned of toxic chemicals and gases. This threatens workers and leads to pollution in the tidal waters,” he said.

Source: The Times of India