In its International Energy Outlook for 2018, EIA forecasts that Africa’s manufacturing sector and industrial energy consumption will increase because of possible regional competitive advantages. However, Africa’s energy consumption per capita lags behind the other two regions that the report examines: China and India.

With higher economic growth in Africa, the projected energy consumption per capita by 2040 increases; however, it never reaches the level of other major economies in 2040.

Nevertheless, the increased investment associated with higher economic growth in Africa will increase the share of the manufacturing sector relative to the services sector.

The manufacturing share of output will also increase, as Africa has a quickly growing working age population, a large base of natural resources, and a trend toward urbanization.

Finally, EIA conducted tested a case to see how high the economy of Africa will reach. It found that its 2040 GDP increases from US $14 trillion to $18 trillion PPP, which is slightly more than one-third of China’s GDP.

With higher economic growth, African manufacturing will increases from 19% to 24% of the economy in 2040. Currently, manufacturing in Africa is 16% of its economy, which is lower than India (33%) and China (51%). 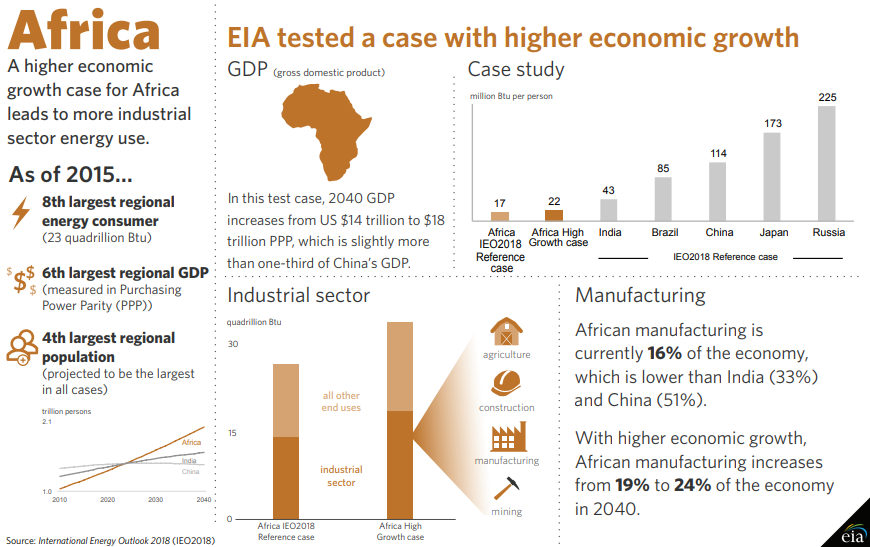