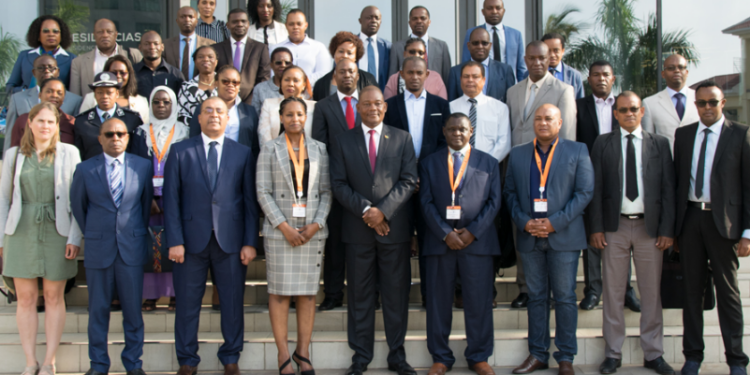 Members of the FISH-i Africa Task Force, comprising eight Southeast African coastal states, met in Mozambique on 26-28 June 2018, to discuss ongoing investigations and to develop plans to strengthen this regional cooperation against illegal fishing in the Western Indian Ocean Region.

The meeting welcomed observers from Sea Shepherd Global who have partnered with Tanzania and FISH-i Africa on ‘Operation Jodari’ to combat illegal, unreported and unregulated fishing in the exclusive economic zone of Tanzania.

The at-sea patrols in Tanzania over the last 6 months resulted in the arrest of two long-liners for illegally shark finning, 27 dhows for smuggling and the fining of 19 vessels that retreated from Tanzanian waters to avoid boardings and inspections. These successes could may now be replicated in other parts of East Africa.

Partnering with Sea Shepherd has enabled Tanzanian law enforcement agencies to work together on board a ship that expands policing capabilities to cover the entirety of Tanzania’s waters. Regional cooperation is key to ridding our waters of illegal fishing. I am confident that collaboration between the East African countries and civil society is the key to winning the fight against illegal fishing. I invite our neighbors to join us in this innovative partnership to save our oceans.

Mozambique will host the Regional Monitoring, Control and Surveillance Coordination Centre (RMCSCC) of the Southern African Development Community (SADC), to be built in KaTembe, Maputo. Plans to incorporate the FISH-i Task Force into the Centre are underway.

FISH-i Africa has supported Operation Jodari since the beginning, and has been a key actor in fostering regional cooperation on illegal fishing between East African countries. An initiative of Botswana-based Stop Illegal Fishing, FISH-i Africa brought Tanzania’s neighbors together in Maputo to discuss expanding the footprint of at-sea patrols.

What Tanzania, Sea Shepherd and FISH-i Africa have together accomplished with Operation Jodari is a blueprint that can and should be followed by other countries. FISH-i Africa has been at the forefront of intelligence sharing on fisheries crime, information that can be acted upon with the addition of a civilian offshore patrol vessel.

The effect of a half-year of patrols, under the vision and leadership of a Tanzanian government driven to combat fisheries crime is clear: poachers have fled Tanzanian waters. The poachers have cleared out, illustrating the importance of forming additional partnerships in East Africa. With new countries joining Tanzania, Sea Shepherd and FISH-i Africa, we can rid the Western Indian Ocean Region of illegal fishing. East African countries are at the vanguard, showing the world how it can be done.

Concluding the meeting, the Task Force agreed a set of priorities for future collaboration in the Western Indian Ocean to stop illegal fishing: