In fact, it is said that activists from the Extinction Rebellion movement have blocked an entrance to oil major Shell’s headquarters in Aberdeen, Scotland.

BBC now reports that activists arrived at the Altens base at about 06:30 on Thursday, January 16, and now plan to remain at the site all day "to hold Shell to account". The group said the protest was part of its two-week long campaign targeting the fossil fuel industry.

Also, the protesters will also walk through Aberdeen city center on Thursday afternoon, starting at the railway station, then going via Union St and the harbor. 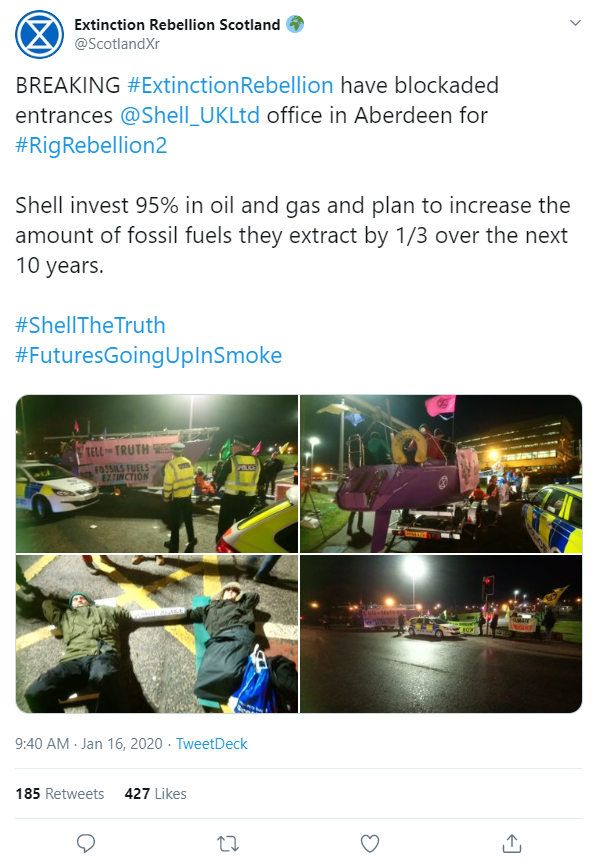 Specifically, a statement from Extinction Rebellion Scotland wrote that "as Australia burns and Indonesia is flooded, with tens of thousands made homeless, the purple boat bears the words, "The Future You Fear Is Already Here", a reminder that catastrophic climate change is already under way across the planet, driven by Shell and the rest of the fossil fuel industry."

The statement added that “last week, as bushfires caused by climate change choked Australia, Shell celebrated the discovery of a huge new gas field off the coast of Western Australia,” stressing that it is

one of the top 10 carbon emitters in the world, and is projected to increase their output of oil and gas by 35% over the next 10 years.

On their part, Shell said it was addressing its emissions and helping customers to reduce theirs.

A Shell spokesman quoted to BBC underlines that "the heightened awareness of climate change that we have seen over recent months is a good thing."

As a company, we agree that urgent action is needed. What will really accelerate change is effective policy, investment in technology innovation and deployment, and changing customer behavior.

It was in October when Greenpeace activists boarded the remains of the Brent Bravo production platform in protest of Shell's plan to abandon four platform jackets and the oily waste they contain, supporting that Shell should remove the structures in line with the terms of the Convention for the Protection of the Marine Environment of the North-East Atlantic (OSPAR).

In December, Shell won a court order making the company able to prevent Greenpeace activists from boarding unmanned oil and gas installations in the North Sea; Greenpeace commented the decision of the court as a "setback", as BBC reports.

Namely, during the ruling Judge Lady Carmichael of the Edinburgh Court of Sessions concluded that the installations are Shell's private property and the company has every right to prohibit any access to them.

Additionally, the Judge noted that the aging structures may also be a hazard to the unauthorized personnel that enters the area without any safety equipment.