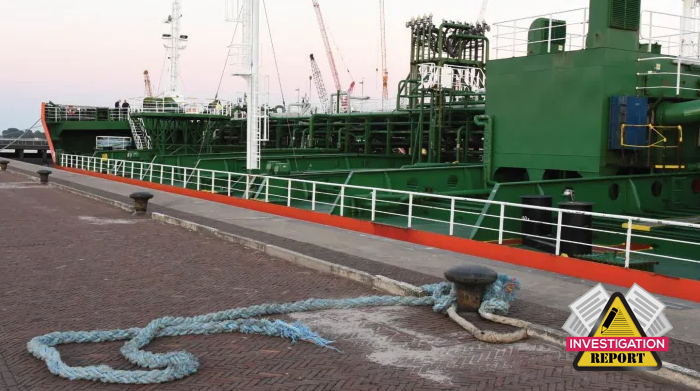 In light of a fatal mooring line accident back in June 2018, Dutch accident investigators urge for a radical 'turnaround in thinking', in order to reduce the risks assosiated with mooring lines.

Namely, the call comes following the incident of the Cyprus-flagged RN Privodino, where a seafarer onboard the chemical tanker was killed after a spring line parted, as the ship was entering a lock at IJmuiden.

According to the investigators, the bridge team and the pilot onboard the tanker, had lacked a common understanding of the vessel's final mooring position within the lock.

In fact, the orward spring line had been placed around a bollard as soon as it came ashore, even though the 30,720dwt tanker was still 37m away from the centre of the lock. It parted under tension, striking the motorman who was in the snap-back zone, killing him instantly.

...as Dutch Safety Board investigation revealed.

Therefore, there was no one position from which he would have been able to simultaneously maintain an overview of the mooring operation, monitor the mooring team members and supervise safety.

As the investigators added:

It was also difficult for seafarers to determine which positions were safe at any given moment as the danger areas on the deck changed depending on which mooring line was used and how it was guided over the deck. The entire foredeck on RN Privodino was designated a snap-back zone and the marking did not indicate the location of these zones in specific mooring configurations.

Following the above mooring accident, Dutch Safety Board calls for Netherlands Maritime Technology (NMT) and the Royal Association of Netherlands Ship Owners (KVNR) to investigate ways to ensure that seafarers only work from safe positions when mooring lines are being handled.

For the records, the investigation also discovered that a mooring line breaks on an almost weekly basis in the locks at IJmuiden and these are usually the forward springs.

Concluding, the report recommended that the Central Nautical Management North Sea Canal area develops an ambitious target aimed at drastically reducing the number of broken mooring lines in the locks. 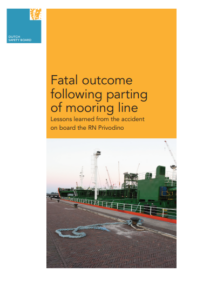