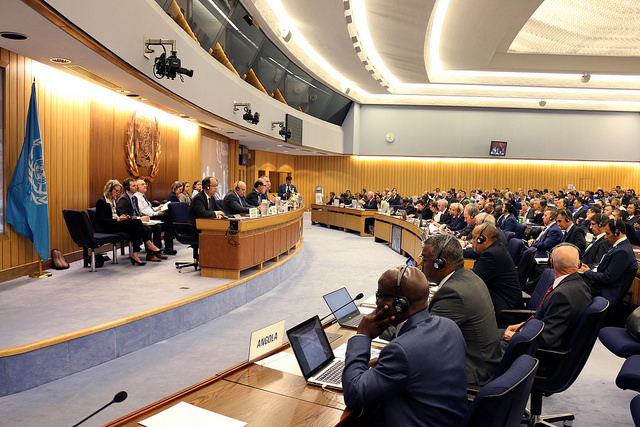 ABS has issued a brief bulletin providing highlights of IMO’s Maritime Safety Committee’s 98th session, which met from June 7 to 16, 2017. The Committee adopted SOLAS amendments effective from 2020 and discussed about the IGF Code revisions, IMSBC Code amendments, cyber risk and autonomous shipping among many other issues.

A complete revision of SOLAS II-1 was adopted by resolution MSC.421(98). Except where indicated otherwise, the revision applies to cargo and passenger ships:

Additionally, the revisions include the performance of damage control drills for passenger ships constructed before, on or after January 1, 2020.

Cargo spaces on all ships used for the transport of motor vehicles (a) with fuel in their tanks for their own propulsion, that are loaded/unloaded into cargo spaces which do not meet the requirements of SOLAS II-2/20, “Protection of vehicle, special category and ro-ro spaces”; and (b) that do not use their own propulsion within the cargo space, are not required to comply with SOLAS II-2/20 provided the vehicles are carried in compliance with the appropriate requirements of regulation 19 and the IMDG Code, as defined in SOLAS VII/1.1.

Windows on passenger ships constructed on or after January 1, 2020, and carrying not more than 36 passengers facing survival craft, escape slides, embarkation areas and windows situated below such areas are to be at least equal to "A-0" class.

Amendments to the 1994 and 2000 HSC Codes exempt high-speed craft less than 20 m and 30 m in length, respectively, from carrying a rescue boat, provided arrangements are available to allow the craft to maneuver in the worst intended conditions to rescue a person from the water in a near-horizontal body position and that the rescue can be observed from the craft’s navigating bridge. Taking into account that the amendments are expected to enter into force on January 1, 2020, a new MSC.1/Circ.1569 was adopted and invites Member States to take action, which may include early application, pending formal entry into force.

LSA Code Revisions clarify the application of the static tests and their proof load for launching appliances, including their structural members and winches.

Similar to the revisions of the IGC Code adopted as MSC.411(97), revisions of the International Gas Fuel (IGF) Code were adopted as MSC.422(98) and, on entry into force on January 1, 2020, will remove the requirement for A-0 class divisions of boundaries, including navigation bridge windows, above the navigation bridge deck. Taking into account that the amendments will not enter into force until January 1, 2020, a new MSC.1/Circ.1568 was adopted and invites Member States to take action, which may include early application, pending formal entry into force.

Amendments under resolution MSC.426(98) enter into force on January 1, 2019, and explicitly assign the shipper with the responsibility to ensure that the test for determining the transportable moisture limit (TML) of a solid bulk cargo has been carried out within six months prior to the date of loading of such bulk cargo. Additionally, the interval between sampling/testing for the moisture content of solid bulk cargo and the commencement of loading is not to be more than seven days so as to ensure that the moisture content of the cargo is less than its TML. Four solid bulk cargoes for which a fixed gas fire-extinguishing system may be exempted have been identified and added to the list published by IMO as MSC.1/Circ.1395/Rev. 3.

Amendments to SOLAS II-1/8-1 were approved and, subject to adoption at MSC 99 in May 2018, are expected to enter into force on January 1, 2020. The amendments require that the master on existing passenger ships constructed before January 1, 2014, be provided with on-board or shore-based computerized stability support for safe return to port after a flooding casualty not later than the first renewal survey after of January 1, 2020. Guidelines on the computerized stability support are currently under development. SOLAS II-1/8-1 was revised in 2012 by resolution MSC.325(90) to require passenger ships constructed on or after January 1, 2014, to comply with these provisions.

A draft Assembly resolution on the Code for the Transport and Handling of Hazardous and Noxious Liquid Substances in Bulk on Offshore Support Vessels (OSV Chemical Code) was approved by the Committee. Subject to concurrent approval by MEPC 71 in July 2017, the Code will be submitted to the 30th Session of the Assembly for adoption in December 2017 and, if adopted, will recommend application to OSVs with keel laying date on or after July 1, 2018.

In light of independent marine investigation reports concerning the explosion, fire and sinking of the MODU Deepwater Horizon in April 2010, and the identified vulnerabilities due to hydrocarbon fires emanating from drilling operations, the Committee adopted resolution MSC.435(98) which revised the 2009 MODU Code

The Committee approved revisions to the Port State Control Guidelines on certification of seafarers, hours of rest and manning. The revisions include:

The revisions will be included in resolution A.1052(27) on Procedures for port State Control, 2011, which is scheduled to be adopted at Assembly in December 2017.

The Committee adopted recommendations by resolution MSC.428(98) on the implementation of cyber risk management, which takes into account that safe operational practices in ship operation should identify risks and establish appropriate safeguards to ships, personnel and the environment under the ISM. The resolution affirms that an approved safety management system should take into account cyber risk management and encourages Administrations to ensure that cyber risks are appropriately addressed in safety management systems no later than the first annual verification of the company's Document of Compliance after January 1, 2021.

The Committee considered a proposal on how IMO instruments might be revised to address the complex issue to ensure safe, secure and environmentally sound operation of Maritime Autonomous Surface Ships (MASS), including interactions with ports, pilotage, responses to incidents and marine pollution. It was considered essential to maintain the reliability, robustness, resiliency and redundancy of underlying communications, software and engineering systems. As a starting point, the Committee agreed to start a regulatory scoping exercise over the four sessions of the Committee, until 2020, which would take into account the different levels of automation, including semi-autonomous and unmanned ships.