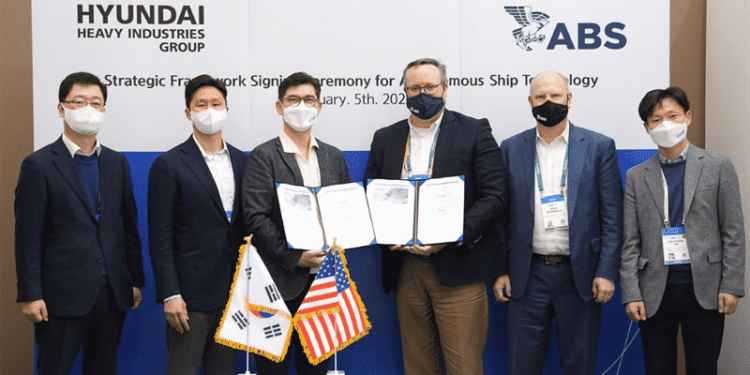 On January 9, 2022, in Las Vegas, Avikus signed a memorandum of understanding (MOU) with ABS to obtain the Approval in Principle (AIP) for the implementation of autonomous ship technologies.

With the MOU signed, Avikus starts stage-by-stage demonstration tests for its various solutions and through the tests, Avikus will be capable of obtaining each certificates by stage for its autonomous vessel technologies, while ABS will review the design, regulate testing procedures and verify the implementation for each stage based on the actual operation data of Avikus.

The collaboration aspires to make maritime autonomous operations a practical reality while sharing lessons learned will contribute to the development and improvement of standards and regulations for autonomous technology and operations.

After the successful demonstration of the full autonomous cruising as the first in Korea in June 2021, Avikus plans to jointly demonstrate the autonomous shipping technology with ABS for a transoceanic voyage of a large-scale commercial vessel which is currently under development.

“The agreement with ABS holds a great significance as it promotes the technology standardization through the stage-by-stage certification of Avikus’ proprietary technologies. With these commitments, we will contribute to expanding the autonomous vessel market and proactively preoccupy the related markets,” Avikus CEO Lim said.

Autonomous vessels will have a significant role to play in the future of maritime transportation but they will need to be at least as safe as existing vessels. It will take extensive research and development activity, teamwork and sharing of expertise among the leading maritime players to get us there