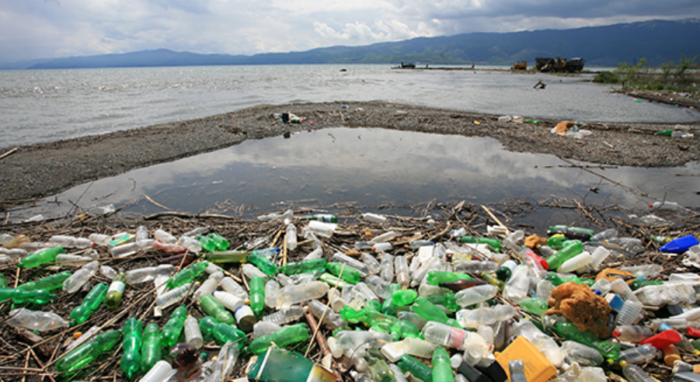 About 75% of plastic bottles in sea come from China, report finds

The last 3 decades have seen an increase in plastic drink bottles, as they are the fastest growing form of pollution, in comparison to all debris types on remote Inaccessible Island. Although most plastic debris floating at sea is thought to come from land-based sources, there is little direct evidence to support this assumption. The findings of "Rapid increase in Asian bottles in the South Atlantic Ocean indicates major debris inputs from ships" report question this widely held belief.

Many oceanic islands suffer high levels of stranded debris, especially those near subtropical gyres where floating debris is accumulated. In particular, stranded debris has been recorded along the west coast of a remote, uninhabited island in the central South Atlantic Ocean, Inaccessible Island, that has a very high macrodebris load since 1984.

Thus, plastic drink bottles have shown the fastest growth rate of all debris types on remote Inaccessible Island during the last 3 decades, increasing at 15% per year compared with 7% for other debris types. Most bottles drifted to the island from South America, being carried 3,000 km by the west wind drift, during the 1980s.

The paper quotes that

The rapid growth in Asian debris, mainly from China, coupled with the recent manufacture of these items, indicates that ships are responsible for most of the bottles floating in the central South Atlantic Ocean, in contravention of International Convention for the Prevention of Pollution from Ships regulations.

Asia had surpassed South America as the major source of bottles by 2009. By 2018, 75% of bottles are from Asia, with 83% of newly arrived bottles, mainly made in China.

The paper in particular examined one-third of all debris items that had accumulated on the coast, that is 2,580 plastic bottles and containers as well as an additional of 174 bottles that were washed ashore during regular monitoring over the course of 72 days, equivalent to 800 bottles·km−1·y−1.

Most containers were polyethylene terephthalate drink bottles manufactured recently, despite the fact that the oldest container found was a high-density polyethylene canister made in 1971. In fact, 90% of the bottles that washed up during our survey were date-stamped within 2 year of stranding.

A WWF report, earlier in the year, revealed that the maritime trade and fisheries are responsible for 20% of plastics at sea, while the maritime industry loses an estimated €235 million a year from marine plastic debris, while the fishing sector loses close to €138 million per year from plastic pollution.

Moreover, it has been stated that only 5% of the world’s plastics are recycled effectively, while 40% end up in landfill and a third in fragile ecosystems such as the world’s oceans. In fact, according to a WEF report, there will be more plastic than fish in the ocean by 2050, adding that plastics have increased twentyfold in the past half-century and is expected to double again in the next 20 years.

You can explore more of the paper here.