Ahead of Denmark's decision to limit liability for maritime claims in respect of the raising, removal, destruction or the rendering harmless of a ship which is sunk, wrecked, stranded or abandoned, including anything that is or has been on board such ship, the matter of, the 1996 Protocol to the Convention on Limitation of Liability for Maritime Claims (LLMC) comes again into light.

Specific tonnage-based figures were set by the LLMC, providing the maximum financial liability of the “shipowners and salvors” in respect of all claims arising out of maritime incidents involving primarily personal claims as well as property damage claims. The unit of measurement for monetary liability used is the Special Drawing Right (SDR) which is an interest-bearing international reserve asset created by the IMF in 1969. 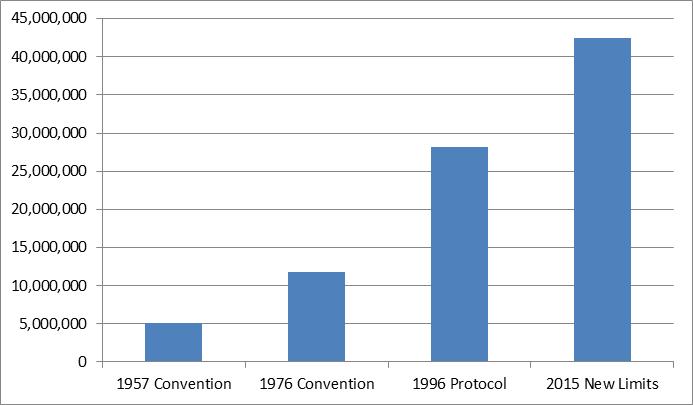 Article 8 of the Protocol provides the limits to be updated in future by means of the 'tacit acceptance' procedure which means that any amendment adopted should have been accepted at the end of a period of eighteen months after the date of notification to all contracting states and shall enter into force eighteen months after its acceptance, i.e. a total of 36 months.

Article 8.5 of the 1996 Protocol provides for three factors to be taken into consideration when acting on a proposal to amend the limitation amount:

The main factor causing the latest amendments is the change in monetary values during the period since the limits were previously set and the above increase reflects this change. This is illustrated in the proposal to amend the 1996 limits that was submitted by Japan to the Legal Committee of the IMO, which was also supported by the International Chamber Shipping (ICS) and the International Group of P&I Clubs (IG).

The above proposal concludes that the changes in the inflation rates between 1996 and 2010 do not exceed 45% and therefore the amendments in the limitation amounts should reflect the above changes. Other contracting states, such as Australia, supported a significantly higher increase of 147%. Eventually it was the more modest approach that was accepted, which based the increase on the above mentioned changes in inflation rates and also took into consideration the additional period (36 months) before entry into force.

As to the experience of incidents, the prevailing view was that the very small number of claims that have exceeded the 1996 Protocol limits suggests that limitation is operating effectively. After all, as noted at the 98th session of the Legal Committee meeting, “a limit which is too high could effectively void the concept of limitation of liability”.