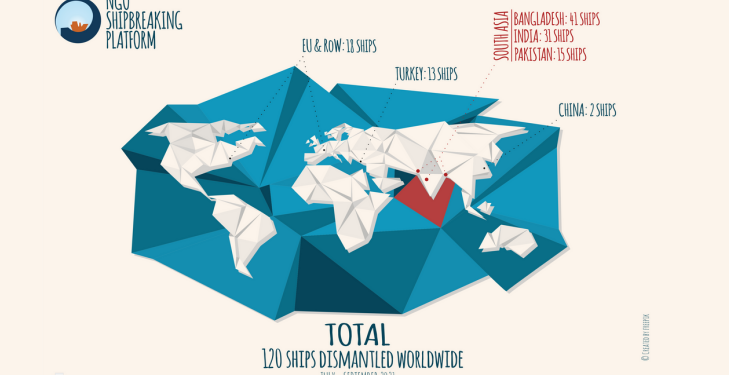 The NGO Shipbreaking Platform issued its quarterly publication to inform about the shipbreaking industry in Bangladesh, India and Pakistan.

The NGO’s recent publication revealed that were a total of 120 ships broken in the third quarter of 2021. Of these, 87 ships were sold to the beaches of South Asia, where conditions are known to put workers ’ lives and the environment at risk.

Almost one-third of the ships sold to South Asia this quarter changed flag to the registries of Comoros, Gabon, Mongolia and St. Kitts and Nevis just weeks before hitting the beach. These flags are not typically used during the operational life of ships and offer ‘ last voyage registration discounts.

They are particularly popular with the middlemen scrap-dealers that purchase vessel scash from ship owners and are grey – and black -listed due to their poor implementation of international maritime law.

The environmental costs of shipbreaking have been denounced for many years around the dismantling area in Chattogram. In 2009, 14.000 mangroves, planted with the support of the United Nations, were illegally cut to make space for the scrapyards.

In 2010, the High Court of Bangladesh directed four shipbreaking facilities to close and to replant the mangroves –the sites only closed in October 2013 and the mangroves were never reseeded. Since the start of the industry, at least 60,000 mangrove trees have been cut a long the 14 km of coast to build up shipbreaking yards.