The NGO Shipbreaking Platform issued its Q3 2019 results noting that there were a total of 122 ships broken, out of which 73 were sold to the beaches of South Asia for dirty and dangerous breaking.

The NGO's report for Q2 revealed that 193 ships were dismantled and the 146 of these were sold to South Asian scrapping beaches.

According to the report, between July and August, 11 workers lost their lives, whereas 20 were severely injured when breaking ships in Bangladesh and India.

Up to now, the NGO has recorded 19 deaths and 30 severe injuries in South Asia.

During the third quarter of 2019, Japanese, American and Greek ship owners sold the most ships to South Asian yards, followed by Indonesian and South Korean owners.

In Bangladesh, seven workers died in four separate incidents. Following one of the accidents, the country’s government imposed a three month ban on the import of end-of-life vessels on the yard, and has demanded that safety measures are taken.

Moreover, Indian media reported that two workers died on the shipbreaking beach of Alang in the last quarter. Also, two separate accidents took place at scrapping yards that have applied to be included in the EU list of approved ship recycling facilities and are promoted by the industry as 'safe and green'. 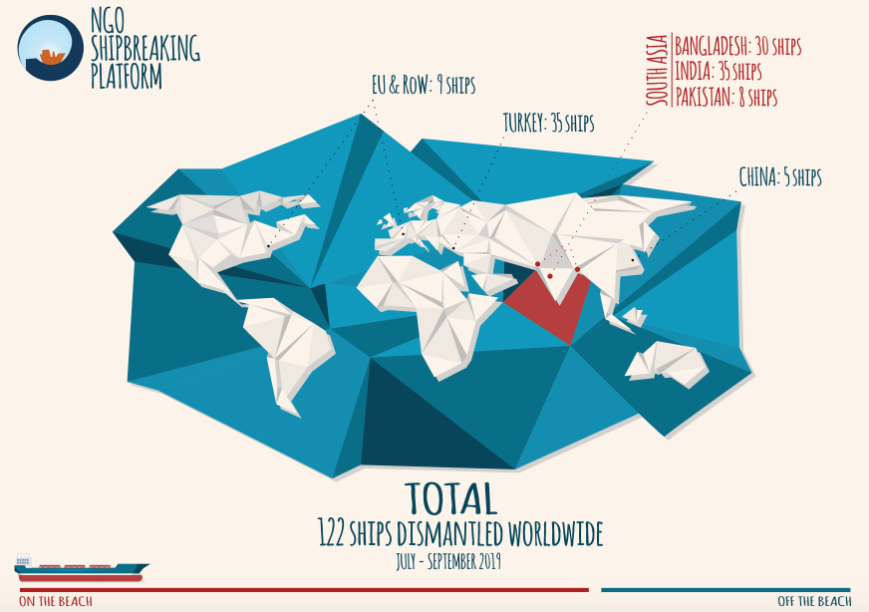 The half of the vessels sold to South Asia modified their flag to the registries of Comoros, Gabon, Palau and St. Kitts and Nevis, some weeks before hitting the beach; These flags offer 'last voyage registration' discounts and are preferred from shipowners.

In light of the change of flags issue, the Platform highlights that

The high number of flag changes at end-of-life seriously compromises the effectiveness of legislation based on flag state jurisdiction only, such as the EU Ship Recycling Regulation.

Due to the fatal incidents, criminal investigations have been launched by EU authorities, following alerts of imminent illegal exports of toxic end-of-life vessels.

The Platform further discusses the case of the ferry Sir Robert Bond which illustrates the Canadian government's lack of action, as for the last two years the vessel has been bough and sold many times; from the Canadian government to a peat moss producer in New Brunswick, to an agent in Quebec, who allegedly sold it for scrap to Indian breakers. In May, the Platform alerted competent authorities about the imminent illegal export of the vessel to South Asia from Canada. Despite authorities having been informed, the owner managed to illegally tow the unit to Alang, where it was beached a few weeks ago.

Concluding, the Platform recently addressed that Bangladesh is the top preferred choice for vessel discharge, as from the total 374 ships that were broken in the first half of 2019, 156 were broken in Bangladesh, leading to significant damages to both human health and the environment.