3,174 maritime casualties and incidents reported in 2019

EMSA released its annual review of maritime casualties reporting the total of 3,174 casualties and incidents, highlighting that in the last 5 years the average number  of marine casualties or incidents recorded in EMCIP is 3239; The number of very serious casualties has been steady over the last five years.

Overall, 2017’s maritime casualties were a total of 3,301, whereas in 2018 EMSA reported of a decrease in marine casualties, in comparison to the previous year.

Yet, the report informs that under-reporting of marine casualties and incidents continues, achieving an overall of 4,000 occurrences per year being a best estimate.

# General cargo ships were the main category involved in a marine casualty or incident (43.8%), followed by passenger ships (23.7%).

According to EMSA, the distribution of the occurrence severity for the ship is very similar for cargo ships, passenger ships and service ships.

The rate of less serious casualties for fishing vessels is significantly low, more than 10%  less, in comparison to other ship categories, indicating that under-reporting is usual in this category.

#3 In 2018 there was a slight decrease of the casualties or incidents with a ship.

The investigators looked for the root causes of the casualty, resulting to:

From a total of 4,104 accident events analysed during the investigations, 65.8% were attributed to a human actions’ category and 20% to system/ equipment failures.

In the meantime, Shipboard operations represented the main group with 65% of the total, with 2,003 related to the accident event “Human action”.

With 566 fatalities, crew is the most affected category of persons. 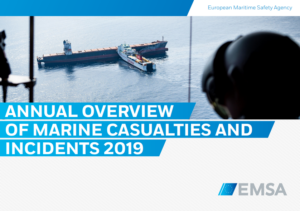