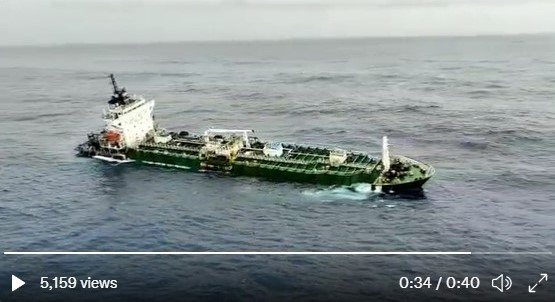 The Indian Coast Guard saved 22 crew members of a product tanker that was taking on water in the Arabian Sea off the Indian state of Gujarat.

According to information, the crew members had abandoned ship into a liferaft, leaving the Panama-flagged MT Global King, as the ship went adrift and was likely sinking with uncontrolled flooding.

The vessel was 93 nautical miles off Porbandar, India, when the incident took place.

Commenting on the situation of the crew, the Indian Coast Guard said that “all crew are safe and healthy.”

What is more, Indian media reporting that the Global King was sailing from Khor Fakkan in the UAE to Karwar, India carrying 6,000 tonnes of Bitumen.

In a swift rescue operation, All 22 crew of distressed vessel MT Global King rescued by @IndiaCoastGuard #Ship and #ALH launched from #Porbandar to 93 NM into the sea. All crew are safe and healthy. @DefenceMinIndia @shipmin_india @MEAIndia @PMOIndia @SpokespersonMoD pic.twitter.com/KVmjsFclsI