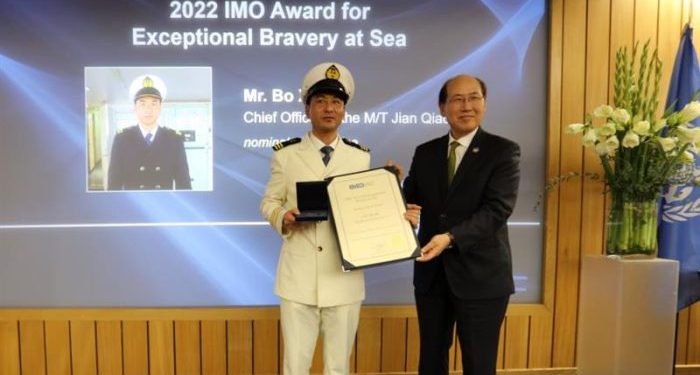 The 2022 IMO Award for Exceptional Bravery at Sea has been presented to Bo Xu, a chief officer from China who selflessly jumped from his oil tanker into freezing seas off northern China to save two individuals clinging to a life raft from a sinking cargo ship.

Bo Xu was honoured during the annual IMO Award ceremony, on 2 November 2022. Mr. Xu, Chief Officer of the oil tanker Jian Qiao 502, was nominated for the award by China.

Mr. Xu was recognised for his courage on the morning of 12 December 2021 when he acted spontaneously during a search for survivors from a sinking ship. Thirty miles northeast of Zhifu Bay in northern China, the cargo ship Tian Feng 369, caught in bad weather and heavy seas, flooded and began to sink.

The tanker Jian Qiao 502, en route to Port of Dongguan, immediately changed course to assist the vessel in distress. After searching for survivors for one and a half hours, chief officer Bo Xu spotted two survivors on a life raft which was filled with water and was drifting. The Jian Qiao 502 headed towards the raft, but the crew soon realised the two survivors were too weak to tie a rope securely around themselves.

Without hesitating, Mr. Xu jumped into the freezing waters and swam hard towards the raft, battling high waves and strong currents. After several attempts he reached the raft, hauled himself onto it and secured the rescue ropes to both survivors. With the help of other crew members on board the Jian Qiao 502, they were then successfully transferred to the deck of the tanker.

Back on board his ship, the chief officer promptly performed emergency resuscitation on both survivors, despite the fatigue and cold he was himself suffering. One of the crew rescued survived. The second, sadly, passed away due to hypothermia.

Accepting his award from IMO Secretary-General Kitack Lim to a standing ovation, Mr. Xu described the freezing waters and high waves during his “race against death” to save the people in distress.

The sea could be cold and merciless but humans are not. As a seafarer, I will never hesitate to jump overboard to save people in danger. This award from IMO is not only an encouragement to me and my team, but also a recognition of China’s efforts in maritime SAR.

As Mr. Xu explained, in 2021 alone, China successfully rescued more than 13,000 people in distress at sea.

The IMO Awards Ceremony also saw a special tribute paid to former Secretary-General William A O’Neil and the presentation of the International Maritime Prize for 2021 to Professor David Attard.