OPEC published its World Oil Outlook (WOO) for 2019 on November 5th, at the Wiener Börsensäle in Vienna, Austria. The report entails medium to long-term projections and assessment for the global oil and energy industry, as well as for the shipping industry, for which it says that the impact of IMO regulations will be less severe than previously expected.

Potential implications for the shipping industry

As the report says, the maritime industry is currently focusing on the imminent implementation of the IMO 2020 sulphur cap, entering into force from 1 January 2020.

Under this aspect, the new regulation is expected to be disruptive for the shipping sector, but also for the global refining system and related refined product supply. However, OPEC explains that 'evolving market conditions and projections in terms of oil demand, liquids supply and oil refining, as well as developments within the shipping industry, have led to slight adjustments to previous IMO-related projections.'

This has led to new assessments, which indicate that the global refining system will have be flexible enough to deal with the changes in the maritime sector’s fuel mix. This will ease the overall impact the the 2020 sulphur cap could have. However, the impact on high sulphur fuel oil (HSFO) prices, the gasoil/HSFO spread, as well as HSFO-rich crude oil prices, will still be significant, although less severe than previously expected.

In addition, the increased use of LNG in maritime transportation will lead to significantly higher fuel efficiency and cleaner emissions. Nevertheless, the combination of LNG use and technological advances for marine engines, as well as the ships themselves, will not be sufficient to cut the marine transportation sector’s GHG emissions by half by 2050.

It is clear that further measures are required

Global demand for energy is expected to rise from approximately 286 million barrels of oil equivalent a day (mboe/d) in 2018 to more than 357 mboe/d in 2040, with average growth of about 1% p.a.

Nevertheless, renewables such as solar, wind and geothermal power, are expected to be the fastest growing source of energy, expanding on average by 6.9%. In fact, demand for ‘other renewables’ is increasing by about 18 mboe/d between 2018 and 2040. Nuclear and biomass are also expected to see growth in demand of approximately 7 mboe/d each, while further demand for hydropower will be around 3 mboe/d. 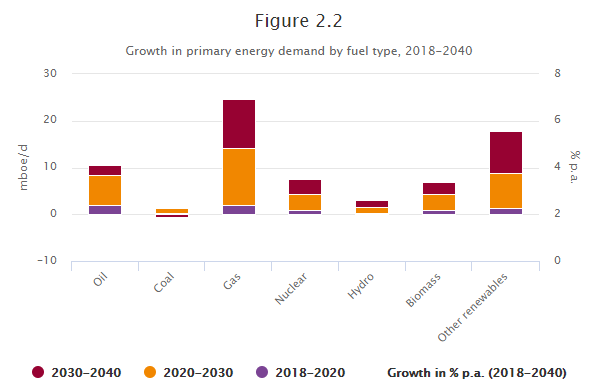 As far as alternative energy is concerned, OPEC expects battery technology to continuously evolve, with e-motors becoming less dependent on rare earth metals. In addition, a shift is being noticed to power generation, away from coal to energy sources with less emissions, including natural gas and various types of renewable energy. As a matter of fact, some EU countries have already established plans to phase out the use of nuclear energy.

Finally, policies and actions that go hand-to-hand with a below 2° pathway would have a significant impact on global primary energy demand, thus decelerating energy demand growth worldwide. Due to this situation, energy-exporting developing countries could face adverse impacts on their future sustainability and growth.