Recently, a paper was launched highlighting the impact of human-emitted greenhouse gases (GHGs) which result to ta long term warming of the planet and the oceans; Thus, the 5 warmest years for the world’s oceans were 2016 to 2019.

Specifically, the paper notes that as the oceans are the main repository of the Earth’s energy imbalance, measuring ocean heat content (OHC) is one of the best ways to quantify the rate of global warming.

It is highlighted that the five warmest years in the ocean since 1955, are outlined in the chart below in ranking order:

The Atlantic Ocean and Southern continued to show a larger warming compared to most of the other basins.

However, the Southern Ocean is the one that has been mostly affected by the global warming heat since 1970: : multiple observations show that the ocean south of 30°S at 0–2000 m was responsible for 35%–43% of the increase in global OHC within 1970–2017, also linked to a net northward heat transport by the oceans across the equator.

Moreover, ocean warming is fatal for the environment, as more than 90% of the heat accumulates in the ocean because of its large heat capacity, and the remaining heating manifests as atmospheric warming, a drying and warming landmass, and melting of land and sea ice.

It is important to note that ocean warming will continue even if the global mean surface air temperature can be stabilized at or below 2°C (the key policy target of the Paris Agreement) in the 21st century (Cheng et al., 2019a; IPCC, 2019), due to the long-term commitment of ocean changes driven by GHGs.

Also, data from the US National Oceanic and Atmospheric Administration (NOAA) revealed that the average global sea surface temperature has increased by about 0.13°C per decade over the last 100 years.

Concluding, to learn more on the issue of ocean warming click herebelow 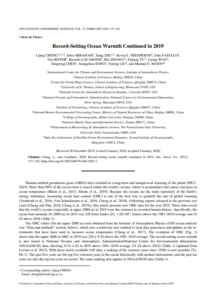