12th incident against ship in Singapore Strait for 2020 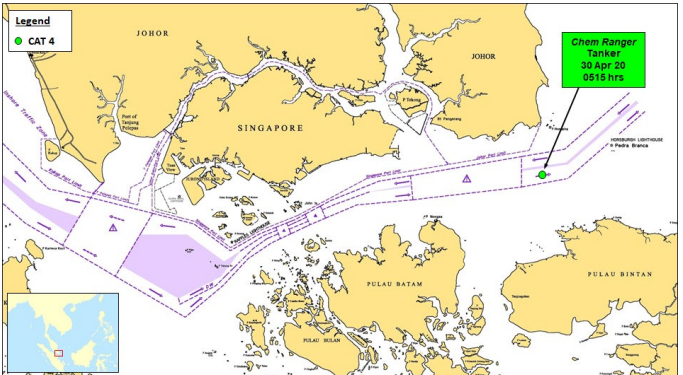 In its weekly report for 28 April-4 May, ReCAAP ISC informed of one armed robbery against ships in Asia, involving the Marshall Islands-flagged tanker ‘Chem Ranger’ in the eastbound lane of the TSS in the Singapore Strait.

The incident took place in the early morning hours of 30 April, approximately 6.2 nm northwest of Tanjung Tondong, Pulau Bintan, Indonesia in the eastbound lane of the TSS in the Singapore Strait (Straits of Malacca & Singapore).

The new incident comes in addition to three incidents reported in the eastbound lane within just 15 days, according to a relevant incident alert by ReCAAP ISC last week.

While the tanker was en route from Singapore to Ulsan, Republic of Korea, three perpetrators were sighted in the engine room.

The master deviated the ship back to the port of Singapore and requested assistance from the authorities to conduct search on board for the perpetrators.

Upon her arrival in Singapore, the Singapore PCG officers boarded the ship and conducted a search. There was no sighting of the perpetrators onboard. The crew was not injured and nothing was stolen.